Home National Chacha T20 from Pakistan – An ardent Kohli fan from across the... 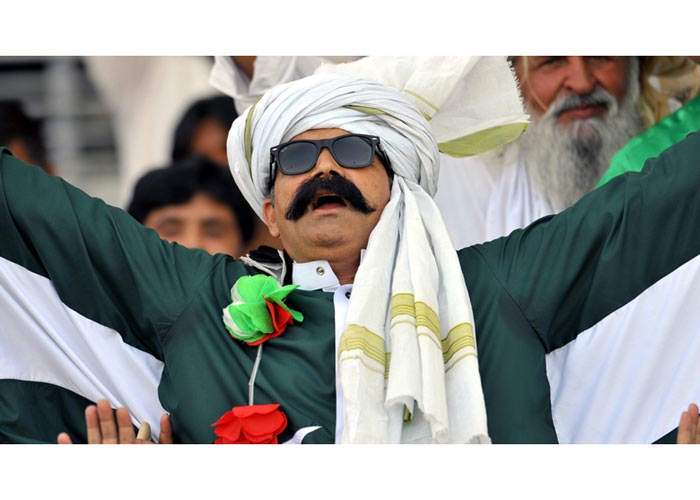 In cricket, whenever a match takes place, there are always a few personalities apart from the players themselves who stand out and catch the eye of the fans. For India, Sudhir Kumar Gautam is one such name who can be spotted whenever the Indian team takes on the field. Similarly for Pakistan, its Chaudhry Abdul Jalil, famously known as Chacha Cricket, who can be seen cheering on the stands whenever the Men in Green play a cricket match.

Another such ardent cricket fan from Pakistan is ‘Chacha T20’.

Muhammad Zaman, a resident of Hafizabad from Pakistan, has been a celebrity in the cricketing world since 2009 and has travelled to the UAE to watch all the cricket matches.

“I have travelled to almost every country in Asia. I have not missed a cricket match held in UAE since 1993. In 2009, Pakistan was playing against New Zealand in a T20I game when I came here, supporting our boys. I kept big moustaches and was then named Chacha T20,” Zaman told IANS on the sidelines of the opening ceremony of the third edition of the Abu Dhabi T10 league.

“It’s not just the T20 or a T10 game, even when Pakistan plays a Test or an ODI match here, I am always in attendance and make sure that I cheer for the boys.”

Zaman revealed that his trips are not sponsored by the Pakistan Cricket Board (PCB) or the Pakistan government. “Mostly, I attend the matches on my own while sometimes the companies sponsor my trips and support me,” he said.

“I have gone to Sri Lanka and Bangladesh twice. Wherever I get the visa, I make sure that I support Pakistan cricket and the team. I have not been able to get a visa to travel to India and watch cricket. But I do want to go there and celebrate cricket.”

In the third edition of Abu Dhabi T10 league, none of the Pakistani cricketers are featuring after the Pakistan Cricket Board revoked the ‘no objection certificate’ it had given to the contracted players. The likes of Shahid Afridi, Shoaib Malik and others would not be seen entertaining the fans. This does disappoint Chacha T20. “I believe the PCB must have taken this decision of not allowing the Pakistani cricketers to play in this league due to some valid reason while thinking about their good. But we cannot change that now.”

“However, I am representing the Pakistan flag here.”

And it’s not just the Pakistan team which Zaman follows ardently. Like many, he is also a great fan of Virat Kohli.

“I have seen Kapil Dev, Navjot Singh Sidhu, Dilip Vengsarkar and other Indian cricketers play. However, Virat Kohli is just another level player. Whenever he plays, I get mesmerised by his batting, his passion for the game. Rohit Sharma is also just next level player,” he added.

Zaman also urged the Indian authorities to allow the team play against Pakistan, wherever possible in the world, including in Pakistan. “Like cricketers from Sri Lanka and other countries come and play in Pakistan, Indian team should come to Pakistan and play so that the friendship between the two countries becomes strong,” he said.   (Agency)