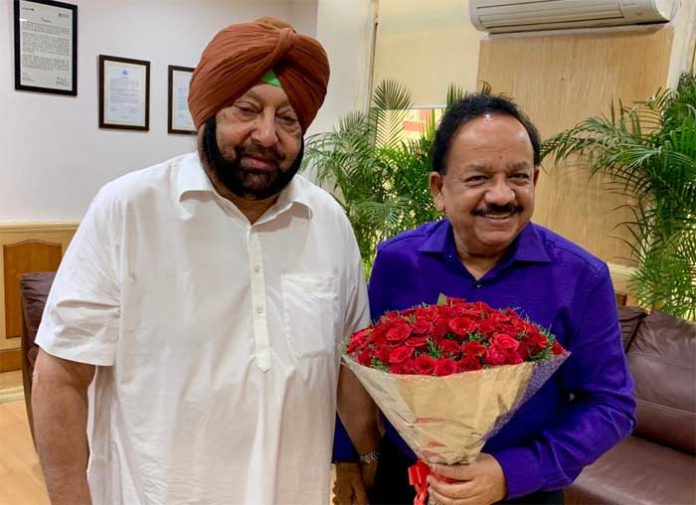 Union Health Minister Dr Harsh Vardhan has sought a detailed proposal from Punjab for dedicating the second AIIMS in the state to the historic 550th Birth Anniversary of Sri Guru Nanak Dev Ji, in response to a request for the same from Chief Minister Captain Amarinder.

The Chief Minister raised the issue during his meeting here with Dr Vardhan. He said he had, in separate letters to the Union Health and Finance Ministers, written to seek the Centre’s permission to dedicate the second AIIMS in Punjab to this special occasion. Captain Amarinder pointed out that the Finance Minister had assured consideration of the matter after the release of the Union Budget.

The first AIIMS is already coming up in Bathinda and the state has proposed the second one either in Ludhiana or Jalandhar. Talking to mediapersons after his meeting with the Union Health Minister, Captain Amarinder said the Rs 250 crore PIMS Jalandhar building could be used for this purpose. He also stated that all clearance for the AIIMS Bathinda project had been given by the state government and nothing was pending with it.

The Chief Minister said that Dr Vardhan had said he would consider the demand after receiving a formal proposal. The Chief Minister’s Chief Principal Secretary has been asked to pursue the matter with the Union Health Secretary.

The Chief Minister also sought from the Union Minister approval for PGI Satellite Centre at Ferozepur. The State Government has transferred land to PGI but the file is pending approval by the Union Health Ministry. Ferozepur is a border district and one of the 120 backward aspirational districts selected by NITI AAYOG for development, the Chief Minister pointed out.

The problem of drugs also came up for discussion, with the Chief Minister reiterating his demand for a National Policy on Drugs. AIIMS Delhi had appreciated the Buprenorphine + Nalaxone therapy offered by the state’s Outdoor Opioid Assisted Treatment (OOAT) Clinics, he pointed out, underlining the need to realign OST (Opioid Substitution Therapy) of the Government of India with the therapy offered by the state.

Captain Amarinder said he had sought central assistance for drug treatment, to which the Health Minister had said his department would be happy to support the state’s efforts.