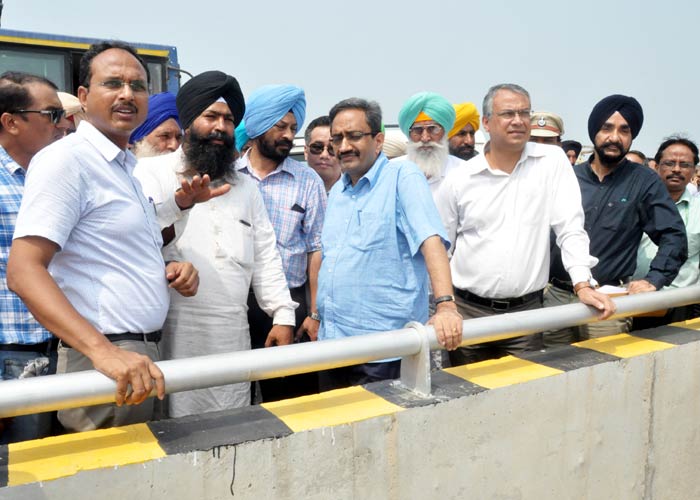 Commissioner of Jalandhar Division Mr B Purusartha and Deputy Commissioner Jalandhar Mr Varinder Kumar Sharma today sought a compensation of RS 270 crore from the inter ministerial team of the Government of India for the whopping loss suffered by district in aftermath of floods.

The team which visited the flood affected villages of Mehrajwala, Chak Bundala, Mandala Channa, Mundi Cholian, Gatta Mundi Kaasu, Nall others were apprised by the Commissioner and DeputyCommissioner that 22 breaches had took place in river Satluj in Phillaur and Shahkot Sub Division in month of August adding that floods had immensely damaged crop, public infrastructure like schools , roads, water works and others besides private property in district and the loss was estimated at a cost of RS 270 crore.

They briefed the team about the devastation caused by the flood fury besides the post deluge relief measures undertaken by the district administration. They said that villages falling in Shahkot Sub Division witnessed large scale destruction. They also briefed the team about the relief and rescue operations carried out as well as the rehabilitation efforts afoot to extend succour to the aggrieved people.

The Divisional Commissioner and Deputy Commissioner sought compensation of RS 4 lakh for gratuitous loss due to floods. Likewise they sought RS 30’lakh for search, rescue and temporary shelter of flood affected villages, RS 80 lakh for temporary accommodation,food and water, RS 15 lakh for clearing of attached area including draining of flood water, RS 224 crore for agriculture loss including that of crop loss and deferment of crop loan recovery, RS 78.25 lakh for loss of animals, provision of fodder and lost animals, Rs 15 crore for damage to more than 3000 houses in 29 villages, RS 20 crore for plugging breaches and for further strengthening of embankment, RS 7 crore for repair of 83 kilometres of Link Road, RS 1.50 crore on repair of 15 down feeders, 200 damaged transformers and a 66 KV Sub station at Mehrajwala besides RS 1 crore for repair of water works in flood affected villages.

Meanwhile , lauding the efforts undertaken by the Punjab Government and district administration to tackle the aftermath of the floods and provide relief to the affected people and the areas, the Joint Secretary (CIS), Union Ministry of Home Affairs Mr. Anuj Sharma assured all assistance as per the norms.