Home Sikhs Centenaries of ‘Sakas’ that took place during Gurdwara Reforms Movement to be... 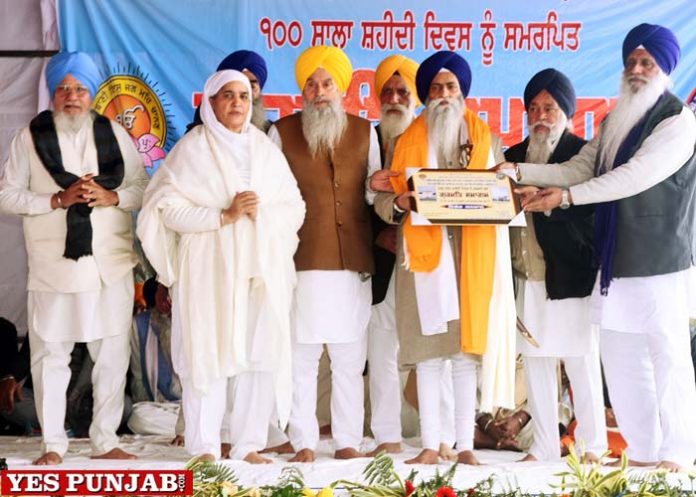 Amritsar, January 28, 2021 (Yes Punjab News)
The coming centenaries of the Sakas that took place during the Gurdwara Reform Movement will be celebrated by the Shiromani Gurdwara Parbandhak Committee (SGPC) with Khalsai Jaho Jalal (awe-inspiring appearance as per Khalsa traditions) and ceremonies will also be held in the towns of those Sikhs who got martyred in the movement.

This was informed by the SGPC president Bibi Jagir Kaur while addressing the centenary function at Aladinpur town of Tarn Taran district, in the memory of Bhai Hazara Singh and Bhai Hukam Singh, martyrs of Saka Tarn Taran.

Concluding the two-day function, Bibi Jagir Kaur said, “Sikhs have made great sacrifices to liberate the Gurdwaras from the evil mahants that can never be forgotten. The SGPC will celebrate the coming centenary days of Sakas on a grand scale so that the present generation can know about its history.”

Bibi Jagir Kaur said that on the occasion of the centenary of Saka Sri Nankana Sahib next month on February 21, 2021, apart from Amritsar, a grand function would be held at the town belonging to Shaheed Bhai Lachhman Singh and also a big jatha (batch) would be sent to Sri Nankana Sahib, Pakistan. She added that she would also join this jatha.

The SGPC president also appealed to the sangat (congregation) to connect with their great heritage and connect the youth with Sikh principles and code of conduct.

They said, “The Sikh community has also made a great contribution for the preservation of the culture of the country. The Sikhs have always played a leading role in giving their martyrdoms for the cause of truth and the sacrifices made by the Sikhs for the liberation of the gurdwaras have awakened the community.”

Earlier, raagi jathas connected the sangat with Gurbani Kirtan and dhadi-kavishar jathas (ballad singers, poetry groups) introduced the glorious history of Sikhism to the sangat. Prominent personalities who arrived during the occasion were honored by the SGPC with Guru’s blessings Siropao (robe of honour).