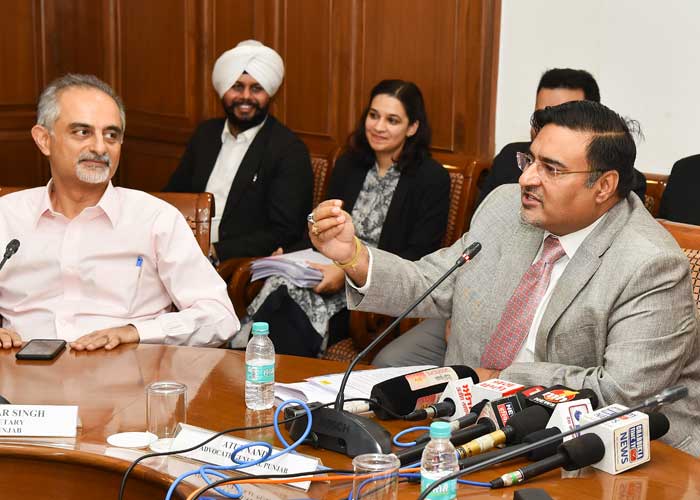 Atul Nanda, Advocate General, Punjab today while setting out the chronology of the events stated that the CBI was entrusted with the investigation of the FIR(s) registered in sacrilege matters by way of notification(s) No.7/521/13-2H4/619055/1 dated 2nd November 2015 and notification No. 7/213/2013-3H4/4132 dated 24th August 2018 issued under Section 6 of the Delhi Special Police Establishment.

The Advocate General further apprised the press on account of the fact that the matters were pending investigation for long with no progress or conclusion in sight, the aforesaid consent granted to CBI was categorically withdrawn by a resolution dated 28th August, 2018 passed by the Punjab Vidhan Sabha.

In continuity of this decision State of Punjab vide Memo No. 7/251/13-2H4/4913 dated 6th September 2018 called upon the DGP, Punjab to forward the proposal to Government to constitute a SIT to investigate these cases which was promptly constituted on 10th September 2018. Hence any authority to/of the CBI to investigate any further was taken away/negated/ divested diluted with the notifications dated 06.09.2018.

He stressed that with each of these letters the Government of India was called upon to hand over the cases back to the State police along with any status reports, updated files, material evidence if any collected by the CBI since the transfer of the cases to the CBI.

Shri Nanda further added that the findings of the Justice Ranjit Singh Commission of Inquiry as also the action of the State Government in withdrawing the investigation from the CBI came to be challenged before the Hon’ble High Court in a bunch of petitions wherein the affidavit dated 13.11.2018 filed by CBI through P. Chakroborty, Additional Superintendent of Police, Central Bureau of Investigation in para 4 clearly acknowledges the factum of withdrawal notifications.

Such withdrawal was not only acknowledged by the CBI, the same was also recorded by the Hon’ble High Court by a detailed judgment and order dated 25th January 2019 wherein the legality and validity of the action of the State of Punjab in withdrawing such investigation from the CBI was upheld and it observed in para 34/35 of the judgment that no satisfactory answer was given by the CBI counsel for the delay in 3 years in investigating the matter and that the CBI counsel could not produce any judgment to show that the State of Punjab does not have power to withdraw the consent previously given to the CBI.

Despite, such correspondence losing the CBI went ahead and hastily filed a Closure Report dated 29.06.2019 before the Court of Special Judicial Magistrate, CBI Cases, Mohali on 04.07.2019.

The copy of the same was never supplied to the State Government and the application moved on behalf of State of Punjab in the Court of Special Judicial Magistrate, CBI Cases, Mohali, to obtain a copy of the Closure Report was dismissed. The State of Punjab has filed Revision Petition against the said order passed by ld. SJM, CBI, SAS Nagar. A copy of the closure report is however now in public domain.

The Adovcate General, Punjab Shri Atul Nanda, stressed that such action of the CBI in absence of any appeal being preffered by the CBI or Government of India is blatantly in violation of the order dated 25.01.2019 passed by the Hon’ble High Court in CWP No. 23285 of 2018 and the same is evidently contemptuous in nature.