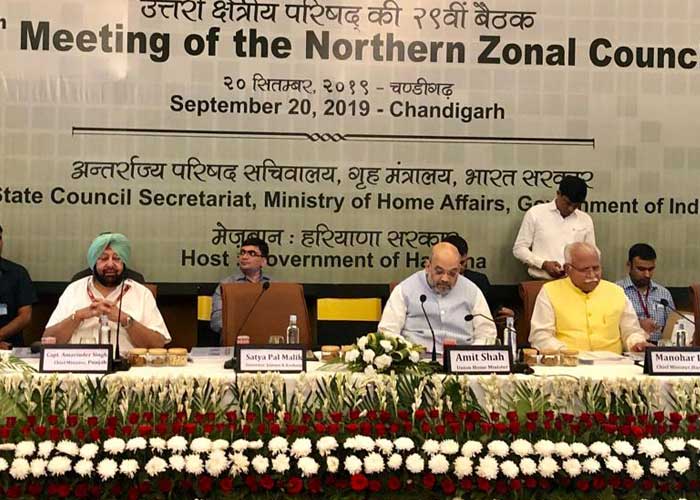 In his address at 29th Northern Zonal Council meeting chaired by the Union Home Minister here, Captain Amarinder Singh sought fulsome support and cooperation from Centre to formulate this Policy thereby covering all aspects for more coherent response to the problem of drug menace.

Captain Amarinder Singh further pointed out that the first and the foremost challenge before these states was to tackle the menace of drug addiction, which were already grappling with this common issue.

He said that all the Chief Ministers of the region had met earlier in July this year to come up with a common agenda and resolved to take firm, coordinated action against drug addiction.

Flagging the issue to name the Mohali International Airport after Shaheed-E-Azam Sardar Bhagat Singh, the Chief Minister impressed upon Amit Shah to take this noble initiative without any further delay.

He said this step would go a long way in paying tributes to the legendary Martyr and iconic revolutionary in a befitting manner besides respecting the sentiments of people of Punjab as this state-of-the-art International Airport was already located in Mohali.

On the river water issues, the Chief Minister categorically said that Punjab does not have any surplus water to share and urged the Union Home Minister to deal this inter-state water issue separately for its early resolution as the matter was already in sub-judice.

He also pointed out that there was growing water crisis in all states with decline in flow of rivers and depletion of ground water. He said, “In Punjab, we are heading into a serious crisis on this account and must cooperate to improve water use efficiency and conserve our most precious resource.”

Reiterating his long-standing demand, the Chief Minister said that the originally agreed 60:40 ratio (between Punjab & Haryana) in positions in Union Territory of Chandigarh Administration, both in senior positions of IAS/IPS officers or at junior levels, must be respected in the letter and in the spirit.

Captain Amarinder Singh also emphasised the need to review the land allotment rates of Government in Union Territory which were quite exorbitant as the State of Punjab needs land for various upcoming institutions in Chandigarh being its capital.

Demanding greater financial support from Centre i.e. up to 75 percent in execution of various projects in the region for mutual benefits, the Chief Minister mentioned that the Punjab Government was now facing grave financial difficulties and at the same time it was committed for such projects.

On the issue of further enhancing regional cooperation between the States by evolving a common ecosystem, the Chief Minister emphasised the need for greater harmonization and rationalization of tax rates in the post-GST regime across the region, especially on excise and petrol and diesel.

Citing the example in this behalf, he stated that the low VAT rates on petrol and diesel in Chandigarh are bleeding Punjab as well as Haryana and he believed that some understanding has emerged between Finance Ministers of these States in this regard.

The Chief Minister also assured that the State Government would provide all due financial support to the Panjab University Chandigarh and PGIMER as both these prestigious institutions have long association with Punjab.

Thanking the Union Home Minister for showing sensitivity towards various issues related to Punjab especially with the sharing of river waters, Captain Amarinder Singh assured of wholehearted support in resolution of these issues amicably.

He also said that the Northern States share common historical and cultural ties and the Punjab Government was fully committed to mutual cooperation and good relations with all these States.

Describing the Northern Zonal Council as a useful platform, the Chief Minister said that it was instrumental in mutually resolving the long-standing issues between Centre and States and amongst States through open discussions and consultations.