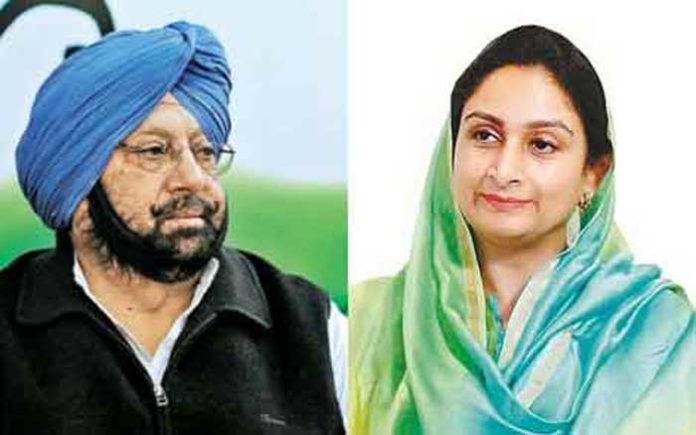 Turning the tables swiftly on the Akali leader, Punjab Chief Minister Captain Amarinder Singh has ridiculed Harsimrat Kaur Badal for once again putting her foot in her mouth with her half-baked facts on the Langar GST issue, accusing her of unnecessarily dragging the controversy even after her lies on the issue were completely exposed.

“Do you have even a clue as to what you are saying,” he asked the Union Minister, after she demanded immediate release of the total refund claim of Rs 3.27 crore to the Shiromani Gurdwara Prabhandak Committee (SGPC).

Countering her latest tweet on the subject of refund of State’s share to SGPC against the state’s share of the Langar GST for Sri Darbar Sahib, the Chief Minister lashed out at Harsimrat’s apparent lack of knowledge with regard to the matter. He also lambasted her for her failure to push for clearance of pending dues by the central government, which had released a mere Rs 57 lakhs so far against its share of the pending claims.

Flaying Harsimrat for her baseless criticism against his government, the Chief Minister said it was clear that she was either completely ignorant of the facts of the matter, or was deliberately and maliciously manipulating them to further her political interests.

Pointing out that the Langar GST concession was notified by the central government only on August 1, 2018, the Chief Minister said since the notification, his government had received only four bills from SGPC, amounting to Rs 1.96 crore. His government had on Tuesday cleared every single penny of these claims, as he had himself disclosed through a statement, Captain Amarinder added.

Giving further details, the Chief Minister said the remaining bills that Harsimrat was referring to, and which amounted to around Rs 1.68 crore, pertained to the period prior to the launch of the Seva Bhoj Yojana, under which the Centre had waived off the GST on Langar.

These bills related to the period August 1, 2017 to July 31, 2018, for which no notification/circulation was issued by the central government, said Captain Amarinder, adding that the state had already sought clarification from the Centre on these claims.

Reiterating his personal commitment made in the Vidhan Sabha that the state would waive off its share of the GST irrespective of whether the Centre chose to do the same or not, the Chief Minister said that even while it was waiting for the central government to clarify the issue, his government had already initiated the legal process to find a way to refund the same.

Hitting out at Harsimrat for playing politics over such a sensitive religious issue, which was close to every Sikh’s heart, the Chief Minister further quipped that, unlike the central government, of which the Akali leader was a part, his government had moved at an unprecedented pace to verify and clear the Rs 1.96 crore in claims received since the issuance of the notification.

In sharp contrast to the state government’s dexterity and sincerity in the matter, the Central Government had, in fact, not even failed to verify all the Rs 1.96 crore in claims so far but had paid up only Rs 57 lakhs of the Rs 1.16 crore it had succeeded in verifying, he added.

“Instead of wasting time engaging in futile allegations and counter allegations with my government, why don’t you go to the central government and pressurise them to verify all the claims and release the pending payment?” the Chief Minister said, in a snide to the Union Minister.

Further, if she is seriously concerned about Sikh sentiment and the interests of the Sikh devotees, as she claims to be, Harsimrat should go and get the Centre to clarify on the pre-notification claims to the tune of Rs. 1.68 crore so that his government could immediate transfer the balance amount, which it has already allocated to the DC Amritsar for the said purpose, said Captain Amarinder.

Earlier, in response to another late Tuesday night tweet from Harsimrat, the Chief Minister responded: “You’re even dumber than I thought @HarsimratBadal. I’ve clearly said the amount claimed was what we’ve disbursed. What kind of government did you guys run? You don’t even know that money is given against claims & that there’s a procedural time taken! Atrocious to say the least”.

Describing her spate of tweets as frivolous and senseless, Captain Amarinder said Harsimrat had stooped to a new low with regard to this vital religious issue, which she was persistently exploiting to promote Akali interests, in line with her party’s policies and her own irresponsible and immature behaviour.