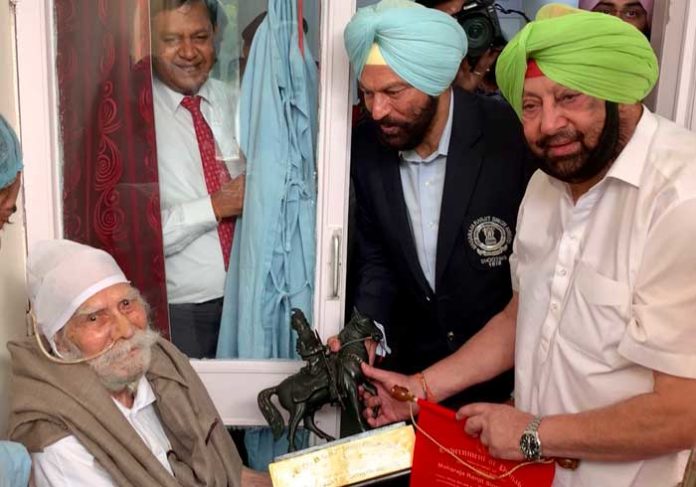 The Chief Minister met the ailing former player at PGI to present to him the Maharaja Ranjit Singh Award, after felicitating around 100 other players, including veterans, with the award at an event here. The award has been reinstituted after nearly a decade’s gapand Captain Amarinder said it would be institutionalized as annual event.

At the awards ceremony, the Chief Minister said that players like the great Hockey Olympian should be aptly honoured in recognition of their superlative contribution to sports.

Sharing his nostalgic moments with the audience, the Chief Minister expressed pleasure to be in the company of sports veterans like great Milkha Singh, former Cricket skipper Bishen Singh Bedi, former World Cup Hockey Captain Ajit Pal Singh, who were the centre of admiration for the entire nation.

The award would honour these veterans and inspire a whole new generation of sportspersons to excel in their respective fields, said the chief minister. The award, which was instituted way back in 1978, carries a cash prize of Rs.2 lakhs, trophy of Maharaja Ranjit Singh Ji in armour atop a steed, a Blazer and a Scroll.

Earlier, in his welcome address Sports Minister Rana Gurmit Singh Sodhi while lauding Captain Amarinder Singh’s passion for sports, said the chief minister’s visionary and dynamic approach had led the Government to come out with a comprehensive Sports Policy encompassing all aspects of promoting sporting infrastructure and the well-being of the state’s sporting icons.

He urged all the senior sportspersons and Punjabis settled abroad to come forward and supplement the efforts of the state government in identifying and nurturing young sporting talent. The untapped sporting potential needs proper direction and guidance, he said further adding that state would ensure best of facilities for all sportspersons.

Sodhi also announced that veteran sportspersons and international medallists would continue to get sports pension in addition to the pension they had already been drawing from their respective departments where they served.