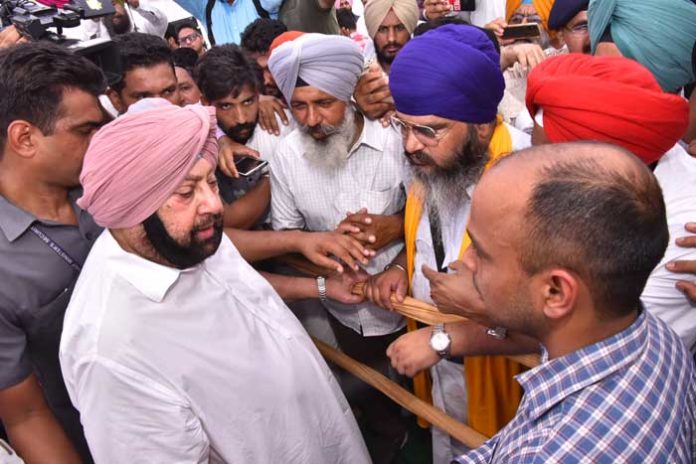 Blaming the Akalis for the control of Ghaggar river going to the Central Water Commission (CWC), Punjab Chief Minister Captain Amarinder Singh on Tuesday said he will meet central government ministers and officials to press for reinforcement of the embankments of the river, which had breached to cause serious damage to standing crops and other assets in Sangrur and Patiala districts.

The division of Punjab by the Akalis in 1966 had led to Punjab’s Ghaggar river going into the hands of the CWC, causing the state to lose control over the critical maintenance of its embankments, said the Chief Minister, adding that the Akalis had even stopped the river reinforcement work undertaken by him in his previous term.

His government, during his last term, had completed 22 kms of reinforcement of the embankments, after which all work was suspended by the previous SAD-BJP government, he added.

Calling upon Haryana also to join hands to resolve the issue, the Chief Minister said the bandhs of the Ghaggar on both Punjab and Haryana side need to be strengthened and made motorable, wherever possible, to avoid repeat of the floods, and the attendant losses and misery, he added.

Pointing out that Punjab had submitted its proposal before the CWC for taming of the Ghaggar six years ago, the Chief Minister said the CWC had, in March 2019, ordered a feasibility study by an independent agency like Central Water & Power Research Station, Pune.

He said he will ask the Government of India to direct CWC to give the necessary clearance expeditiously to allow Punjab to undertake Phase 2 of the project from Makror Sahib to Karail (17.5 kms).

Captain Amarinder was speaking with farmers and mediapersons in Moonak (Sangrur) and Badshahpur (Patiala) after taking a 360-degree view, from the air, to assess the damage caused as a result of the flooding caused by a breach in the Ghaggar river catchment area, following torrential rains.

The Chief Minister, who flew over Rajpura, Ghanaur and Shatrana before stopping over at Moonak in Sangrur, said about 50000 acres of crop had been lost in Patiala and another 10000 acres in Sangrur due to the breach caused in the catchment area of river Ghaggar.

Captain Amarinder, who said he had been seeing the problem since his childhood in Moonak, which he described as his ‘nanka’, underlined the need to reinforce the bandhs to prevent flooding and damage in the future.

The Ghaggar river was creating problems even in Bathinda, where even the police lines were under water, said Captain Amarinder, adding that the district had received the highest rainfall in 40 years, causing the water to flow at very high levels.

In Moonak, the Chief Minister ordered the DC to pay immediate compensation to the 28 houses damaged (three of them completely) as a result of the flooding. He further directed the officials to send the fire brigade and JCB machines today itself to raise the roads, and also instructed the Mandi Board to commence work on the same without delay.

The Chief Minister assured the people that his government had adequate disaster relief funds to tackle the situation. The local administration, the Army, the National Disaster Relief Force and the local residents had been working hard round the clock to plug the canal breach, said the chief minister, lauding their efforts.

Later, expressing deep sorrow at the loss of crops in Badshahur, Captain Amarinder said he felt saddened to see the damage in the Patiala villages, which he had been visiting since he was a child.

Fortunately, there was no loss of human life or cattle, said Captain Amarinder, adding that a few people had been injured and were being provided medical treatment by the government. He assured construction of 33 kucha houses that had been damaged in the flooding.

The Chief Minister expressed his gratitude to the 1st Armoured Division of the Army, based in Patiala, for the help extended to the district administration to provide relief to the people.

Captain Amarinder also announced Rs 60 lakhs for rebuilding the bridge that had been damaged in Sirkapda village of Ghanaur. In response to a request, he also announced that the Mandi in Badshahur would be made ‘pucca’ before the arrival of the next crop.

Usually flooding took place in these areas in September, but with the weather patterns changing, it was becoming difficult to make any predictions, said the Chief Minister, warning that though water had receded for now, it was important to remain prepared for any eventuality.

Earlier MLA Shutrana Nirmal Singh also apprised the Chief Minister about the extent of damage to crops and property occurred in the villages of Shutrana Assembly constituency due to the breach in Ghaggar.

The Chief Minister was accompanied by his Media Advisor, Raveen Thukral, and CPSCM, Suresh Kumar.