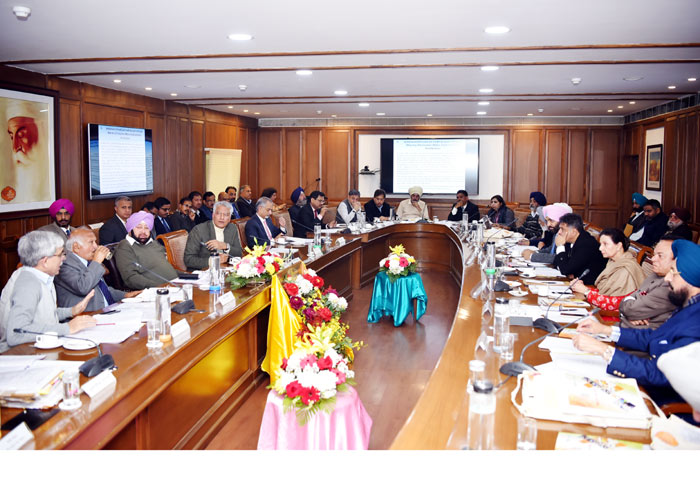 Perceiving the Agriculture Price Commission’s latest recommendation to the Centre to review the MSP policy as a serious threat to Punjab’s farmers, Punjab Congress MPs on Wednesday urged Chief Minister Captain Amarinder Singh to approach the Prime Minister and urge him not to consider any such review.

At a meeting convened by the Chief Minister to discuss budget proposals for the next fiscal and various issues pending with the Centre, the Members of both Houses of Parliament decided that the Chief Minister should press upon the Prime Minister the dangers of accepting the Agriculture Price Commission’s recommendation.

Any change in MSP procurement policy will adversely impact Punjab’s economy, they felt, expressing the fear that the Centre would limit procurement as the the first step towards putting an end to MSP purchase.

Briefing the MPs on the status of the SYL case, the Chief Minister asked the MPs to push for amendment to Proviso of Section 12 of the Inter-State River Water Disputes (Amendment) Bill 2019, to protect Punjab’s water resources.

It was decided at the meeting that officials would be deputed by the state in Punjab Bhawan at Delhi to coordinate with, and brief, the MPs on issues concerning Punjab. This was essential to ensure more effective interventions in matters relating the state, said a spokesperson after the meeting.

During the discussion on MSP and procurement, the meeting referred to a note by the Punjab Ministry of Distribution relating to Evacuation of Central Pool Food Grains from the Food and Public Consumer Affairs to underline the problems currently faced by the state in terms of tardy and slow procurement of wheat and rice by central agencies.

A presentation by the Department showed that 140 Lac Metric Tonnes of wheat and 95 LMT of rice belonging to the Central pool are currently stored in the state. 70 LMT of wheat is lying in the open/CAP, including 16 LMT wheat purchased under relaxed specifications (URS) during RMS 2019-20 and 10 LMT wheat procured in RMS 2018-19.

This was despite the fact that the normal shelf life of URS wheat is 6 months while normal wheat stocks stored in the open can be maintained for 9 months only.

The average monthly movement of Food Grains (Wheat & Rice) from the state by FCI & State Procurement Agencies has only been 11.7 LMT during the last months, whereas, it used to be around 15-16 LMT per month during the previous years. As a result of slow evacuation of food grains, the state is facing an acute space crunch, which will severely impact delivery of rice in coming months and procurement of paddy in the next season.

The Department has already sought the intervention of GOI for immediate evacuation of Central Pool Food Grains from the state, and the matter has also been taken up this matter with the Prime Minister’s office.

It was decided that the MPs would press the Centre for immediate evacuation of the Central pool Food Grains from the state, in view of the threat to the quality of stored wheat due to heavy rains and floods in parts of Punjab.

The state will also continue to pursue, through the MPs, the matter of promotion of maize as an alternative crop to paddy, it was decided at the meeting.

Among the other key issues of Punjab’s interest pending with the Centre, that came up for discussion during the meeting, were Punjab’s demand for compensation of Rs 100 per quintal to farmers for Zero Burning of Paddy residue, reduction of Tax Rate for Dairy Cooperatives, and exemption of Dairy products from Free Trade negotiations.

The meeting also decided to pursue with the Centre, and in Parliament, Punjab’s pending demand for exemption to Textile Sector in the Border and AspirationalDistricts under Section 80(1)(b) of Income Tax Act,1961.

The meeting expressed concern over the pending issue of Settlement of Food Cash Credit Account of Punjab, to the tune of Rs.31000 Crore, and it was decided that the MPs would aggressively pursue the matter with the central government. The Chief Minister pointed out that the cash-crunched state was suffering immensely due to the delay in settlement of this amount.

The MPs were also asked by the Chief Minister to press for declaration of Eco-Sensitive Zone around Sukhna Wildlife Sanctuary Chandigarh for the areas falling in Punjab Territory.

A total of 34 issues were listed for discussion at the meeting as part of the agenda that the MPs have been directed to take up in serious earnest with the Centre.

Punjab Pradesh Congress Committee (PPCC) chief Sunil Jakhar said all the MPs should take up in Parliament the issue of the delayed SGPC elections, to break the stranglehold of the Akalis on the religious body. The tenure of the current SGPC had ended in 2016.