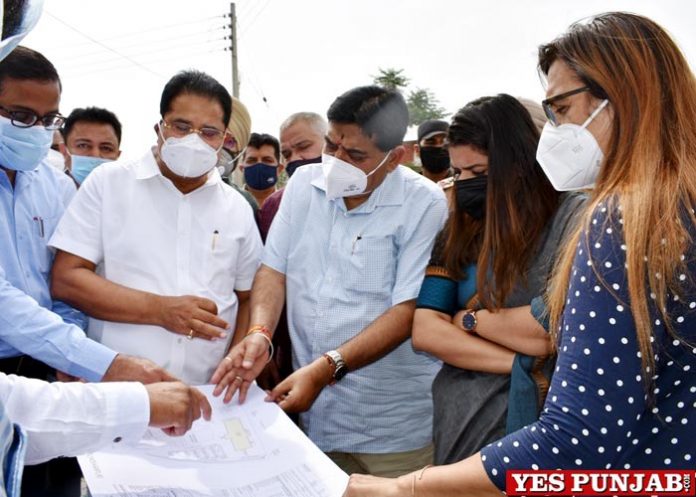 Hoshiarpur, April 14, 2021 (Yes Punjab News)
Punjab Medical Education and Research Minister OP Soni today announced that the construction of Hoshiarpur medical college would start soon as the Chief Minister Captain Amarinder Singh to lay the foundation stone this Rs. 375 crore prestigious project in first week of July this with completion of all requisite formalities, the necessary funds have also been released to commence the project.

Accompanied by the Industries and Commerce Minister Sunder Sham Arora, the Medical Education and Research Minister OP Soni after reaching at the local DAC pay the floral tribute to the Bharat Ratna Dr. B.R. Ambedkar on his 130th birth anniversary and said decks had been cleared to start and timely completion of this Medical College project besides upgrading the civil hospital to a capacity of 500 beds.

He also announced that the Punjab Government had fixed a timeline to accomplish the project by December 2022 and start of session in 2023, which would give a boost to medical education and healthcare facilities in this region.

As 20-acres of land is required for establishment of a Medical College and Punjab Government has decided to ramp up the capacity of civil hospital from existing 200 to 500 beds besides construction of Medical College building on Chandigarh road.

Soni said that Rs 325 crore would be incurred on the construction of the building and Rs. 50 crore to be spent for infrastructure including ultra modern machinery.

The Minister also pointed out that the availability of super speciality doctors in medical college would easily ensure the treatment and healthcare facilities for major disease also here in Hoshiapur. The State Government has allotted the work of this project of PWD B&R so that the quality and timely completion of work could be ensured.

Giving information about the three upcoming medical colleges, the Minister said that the Mohali Medical College is all set to start classes from this session while construction at Hoshiapur and Kapurthala was on the anvil.

He said that Punjab Government was also setting up two more medical colleges at Gurdaspur and Malerkotla for which the formalities are on the verge of completion.

Meanwhile Soni, Arora along with Principal Secretary Medical Education & Research D.K.Tiwari, Deputy Commissioner Apneet Riyait and other officers took a round of site inside the Civil Hospital.

Speaking to the media persons, Soni said that under the visionary leadership of Chief Minister Captain Amarinder Singh more than 85 percent promises had already been fulfilled and he was fully confident that the people would repose their faith in Captain Amarinder’s leadership. He also reviewed the sketch of proposed project besides giving his valuable suggestions.