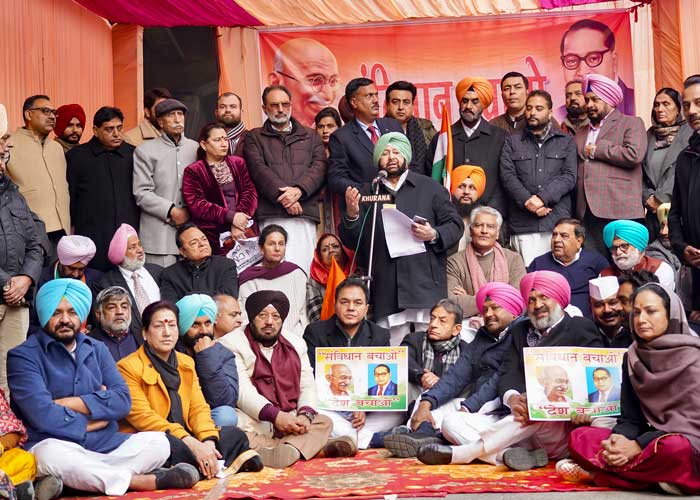 Lashing out at the Bharatiya Janata Party (BJP) for trying to change the Constitution’s preamble, Punjab Chief Minister Captain Amarinder Singh on Monday called upon all Indians to unite against their divisive and dangerous attempts to destroy the nation’s secular fabric with the draconian Citizenship Amendment Act (CAA).

The BJP could not get away with its nefarious designs, the Chief Minister warned, pointing out that protests against the draconian Act were going on currently in 16 states, including Punjab.

Reading out the preamble, he said it was the very basis of India’s foundation, which nobody could disturb. While Articles of the Constitution are amended from time to time, not just in India but across the world, no one can tolerate tinkering with its basic structure, he added, pointing out that even the United Nations had termed the CAA discriminatory.

Referring to the manhandling of AICC general secretary Priyanka Gandhi in Uttar Pradesh, Captain Amarinder said the police could not have indulged in such behaviour without CM Yogi Adiyanath’s knowledge. “Aren’t you ashamed of such actions,” he asked Yogi Adiyanath, warning that the Congress would not forget this incident and tables would turn one day.

Pointing out that MIT students had also passed a resolution against CAA, the Chief Minister observed that while the entire world was expressing concern over the ramifications of the legislation, “those sitting in Delhi continue to be adamant, refusing to pay heed to the voice of the nation.” Captain Amarinder pointed out that Sri Guru Nanak Dev ji had also taught secularism, as manifest in his words “na koi hindu, na koi musalman, sab rab de bande” (nobody is a Muslim or a Hindu, all are God’s people).

The protest march, held in Punjab’s economic heartland, would help send the anti-CAA message across India, asserted the Chief Minister.

In an informal chat with mediapersons later, Captain Amarinder reiterated that his government would continue to oppose the Centre’s attempt to destroy India’s secular character and change the Preamble of the Constitution.

On the manhandling of Priyanka by UP police, he termed the incident shameful. It was shameful, said the Chief Minister, that Guru Nanak Dev ji’s secular ideology was being attacked while his 550th birth anniversary was being celebrated across the world.

Earlier, Senior party leader and Finance Minister Manpreet Badal recalled Mahatama Gandhi’s removal from a train in South Africa, prompting him to warn the White officials that he will throw them out of his country.

Likening the current situation with that incident, Manpreet said if Modi tried to send Indians out of the country, the Congress will turn him (Modi) out of India.

Noting that the BJP had secured a mere 39% votes in the last Lok Sabha elections, he asserted that with the remaining 61% supporting the opposition parties, the Modi government could not get away with the enactment of such black laws.

PPCC president Sunil Jakhar lambasted the `kale angrez sitting in Delhi’ (BJP-led central government) for trying to implement the agenda which the pre-Independence`goras’ (Whites) had failed to execute.

The people accepted the demonetisation and GST assaults patiently but had not lost all their patience, he said, pointing to the country-wide anti-CAA protests, led by students.

Pointing to Modi’s shocking claims of identifying people by their clothes, Jakhar flayed the tyranny of the NDA government, warning that no citizen would escape the ill-effects of the Centre’s actions. He took a dig at the BJP leadership’s `tukde tukde gang’ remarks, saying the NDA itself was a `tukde tukde’ government, which was out to divide the country.

Lok Sabha Ludhiana Lok Sabha MP Ravneet Singh Bittu termed the CAA a black law, which majority of the states would not implement since about 70% of the chief ministers were now from the Congress and other Opposition parties, marking a clear decline for the BJP graph.

The chief minister earlier also participated in the protest march that started from Daresi Ground and culminated at the statue of Mahatma Gandhi at Matarani Chowk.