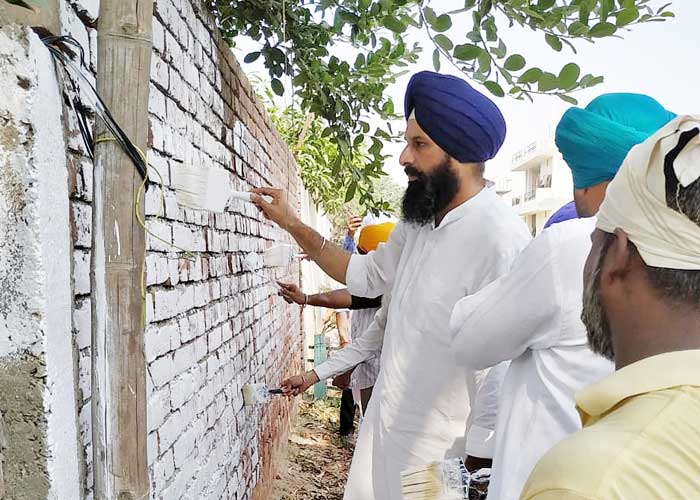 Talking to newsmen after doing ‘sewa’ along with the ‘sangat’ of Majitha assembly constituency during the course of which he participated in the ‘safedikaan sewa’ besides doing ‘sewa’ at Gurdwara Ber Sahib and contributing Rs 4.5 lakh on behalf of the ‘sangat’, Mr Bikram Majithia said the faces had changed but the Congress policy remained the same.

“Earlier Indira Gandhi attacked Sri Akal Takth Sahib with tanks and artillery shells with the sole purpose of causing hurt to the Sikh psyche and dividing the community. Today under chief minister Capt Amarinder Singh the same history is being repeated.

This time also Sri Akal Takth Sahib is being undermined with the sole purpose of ensuring the 550th Parkash Purb of Guru Sahib is not celebrated in a befitting manner”.

The SAD leader said the Sikh Sangat would not let the conspiracy of the chief minister and his ministers to sabotage the Parkash Purb celebrations succeed.

Asking the government not to indulge in such kind of politics which would create divide in society and spoil communal harmony, Mr Majthia said the government should fulfill its responsibilities like providing adequate infrastructure for the celebrations and let the democratically elected religious body – the SGPC do its duty and conduct the Parkash Purb celebrations.

“This has also been the tradition”, he said adding the SGPC had conducted the celebrations as per ‘maryada’ when S Parkash Singh Badal was the chief minister. Even the Bihar government gave the responsibility for conducting the celebrations to the SGPC”, he added.

Mr Majithia said the Congress government was returning to its old policy of divide and rule because it had failed to provide any governance in the State. He said peoples’ faith in the government had eroded after Capt Amarinder Singh failed to fulfill the oath taken on the holy Gutka Sahib and the ‘charan’ of Sri Guru Gobind Singh ji.

“Since the Congress has nothing new to give to the people it has gone back to adopting the policies of Indira Gandhi to sow seeds of discord in the Sikh community”, Mr Majithia added.

When questioned, the Akali leader also asked the chief minister to disclose why he had not taken any action against cabinet minister Bharat Bhushan Ashu for disrespecting the holy symbols of the faith while attacking a Sikh youth in Mullanpur Dakha.

He said the issue was not of a Congress worker but of the ‘beadbi’ of the ‘kakaar’. He said such kind of acts would only take Punjab back to the black days. He also urged the people to teach a lesson to Dakha Congress candidate Capt Sandeep Sandhu.

He said ‘Chhota Captain’, as Sandhu was referred to, was party to the misrule of the Congress as he was directly responsible for advising the CM on how to implement the promises made to the people.