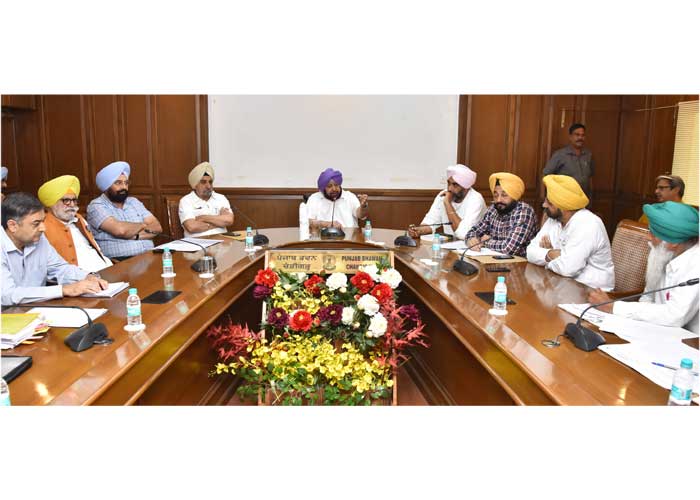 While reiterating his commitment to the welfare of the farmers, Punjab Chief Minister Captain Amarinder Singh on Monday sought the support of the state’s Kisan Unions to check power theft and create awareness on judicious use of the fast depleting ground water.

Chairing a meeting with the delegation of Kisan Sangharsh Committee (Pannu Group) here at Punjab Bhawan, the Chief Minister expressed deep concern over the alarming trend of power theft, which he stressed the need to arrest in order to make PSPCL economically viable. The situation was particularly alarming in the border areas. The Chief Minister urged the farmers to bring any incident of power theft to the enforcement wing of Powercom.

The Chief Minister assured the delegation that his Government was fully seized of the hardships faced by the farmers and was committed to ensuring their welfare on priority.

On the issue of pending payment of Rs. 137.56 crore on account of outstanding electricity bills of domestic consumers up to March 31, 2016, the Chief Minister said that the matter was already under the active consideration of the Government.

He directed the Principal Secretary Power to thoroughly examine this issue. The meeting was informed that PSPCL had not collected these pending bills so far from various categories of domestic consumers comprising Scheduled Castes, Non-Scheduled Castes, Below Poverty Line and Backward Classes, nor had it disconnected their connections due to non-payment.

Responding to the unions’ demand for Government jobs to the kin of the farmers killed during various agitations, the Chief Minister directed the ACS Agriculture to bring the necessary agenda in the Council of Minister’s.

The ACS disclosed that seven persons had already been given government jobs and the remaining three would also be offered jobs immediately after the Cabinet’s approval.

The Additional Chief Secretary also informed the meeting that the Revenue, Relief, Resettlement and Disaster Management Department had enhanced the rate of compensation to the families of farmers/farm labourers, who committed suicide due to indebtedness, from Rs. two lakh to three lakh to per affected family.

Till date, 13 victim families of district Amritsar and 31 such families of Tarn Taran district had been compensated under the revised policy. It was also apprised that the State Government had provided debt relief of Rs. 4678 crore to 5.79 Lac eligible small and marginal farmers under the Debt Relief Scheme.

Briefing the Chief Minister about the criminal cases registered in the past against agitationists, DGP Intelligence V.K. Bhawra disclosed that 8 FIRs had been registered by Punjab Police and 9 by Railway Protection Force.

A Special Investigation Team headed by IGP Crime had been constituted to look into the criminal complaints/ cases mentioned by Kisan Mazdoor Sangharsh Committee, and investigations were in progress.

To a demand for enhancement of the existing crushing capacity of sugar mills, the ACS Agriculture disclosed that the matter with regard to expansion of the Gurdaspur Cooperative Sugar Mills to 5000 tonnes cane crushing per day was under active consideration of the State Government.

The Cabinet Sub Committee constituted for this purpose had already finalized its report for the upgradation of all Cooperative Sugar Mills to convert these into Sugar Complexes in order to make the mills sustainable for a long period.

Taking part in the deliberations, Finance Minister Manpreet Singh Badal urged the members of the delegation to motivate the farmers to refrain from stubble burning particularly during this year, which coincides with the 550th Prakash Purb celebrations of Sri Guru Nanak Dev Ji, as a mark of reverence to the first Sikh Guru, who propagated the cause of conservation of natural resources viz air, water and earth.

The delegation was led by its President SatnamSingh Pannu and General Secretary Swaran Singh Pandher.