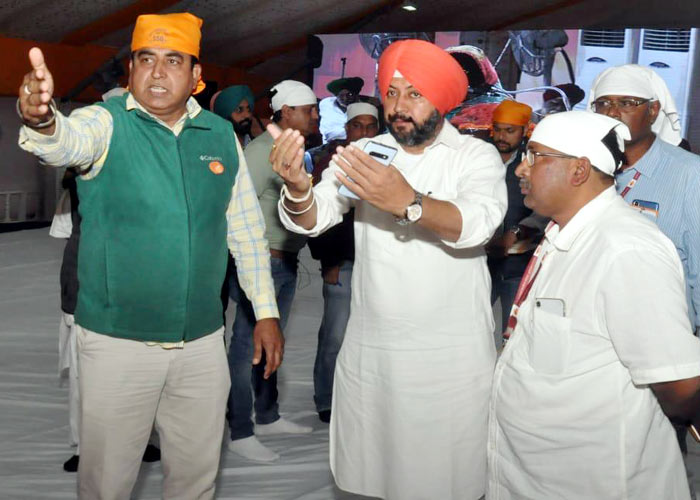 Punjab Chief Minister Captain Amarinder Singh along with other dignitaries would preside over a function organized by the Punjab government here at Sri Guru Nanak Darbar (Main Pandal) on November 12 to commemorate the 550th parkash purb of Sri Guru Nanak Dev ji.

They said that the function would be a humble and befitting tribute to Sri Guru Nanak Dev ji, who gave the people a message of love, brotherhood, compassion and humanity.

Captain Sandhu and Mr. Cheema said that Punjab government was committed to celebrate the 550th parkash purb of Sri Guru Nanak Dev ji in an unsurpassed manner for which several initiatives have been taken by the Punjab Chief Minister Captain Amarinder Singh.

The Secretary Political and MLA said that special focus has been laid facilitating the devotees coming from across the globe. They said that every effort had been made to ensure comfortable and smooth stay of the pilgrims in the holy city.

They called upon the people to be a part of the mega event slated to be held on Tuesday as it was a once in a life time opportunity for every individual.

Meanwhile, the Deputy Commissioner Kapurthala Mr. DPS Kharbanda, who presided over a meeting here today to finalize the arrangements for the event, said that the Punjab Chief Minister Captain Amarinder Singh had performed sewa to initiate Sehaj Path of Sri Guru Granth Sahib ji on November 5 at the Sri Guru Nanak Darbar.

He said that the bhog of Sehaj path would be held tomorrow in which Chief Minister along with his Cabinet colleagues and other dignitaries would attend the event. Mr. Kharbanda said that the administration has already made elaborate arrangements for the upcoming event and no stone would be left unturned to make this mega event a huge success.