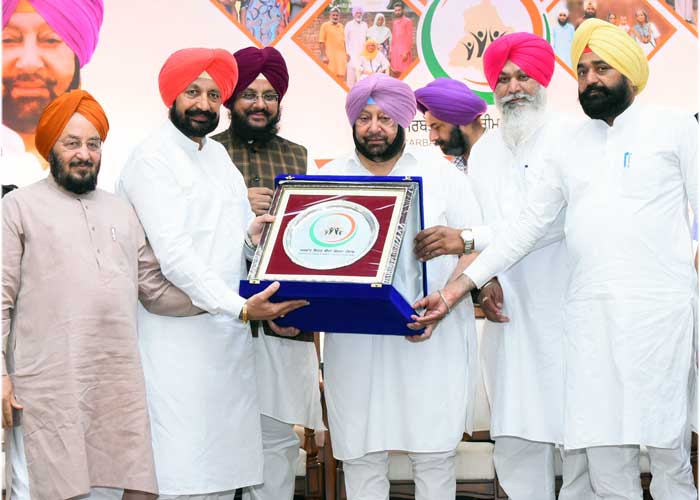 E-cards were handed over to the first 11 beneficiaries from Mohali district to kick off the scheme, which would entitle beneficiaries to avail annual cashless treatment up to Rs. 5 Lakh per family per year, including pre-existing diseases, was aimed at ensuring the best possible treatment to the beneficiaries free of cost.

With this scheme, covering 76% of the its population, Punjab has become the first state in the country to offer medical insurance cover to the maximum number of its people, the Chief Minister announced, dedicating the welfare initiative to Rajiv Gandhi. His government was committed to fulfilling the aspirations of the people with the vision of the country’s youngest prime minister, he added.

It may be recalled that the state government had decided, a few months ago, to extend the PMJAY to provide cashless health insurance cover of Rs. 5 Lakh per family per year to more 31 Lakh families. While the cost of the premium for 14.86 lac families originally covered under PMJAY, as per SECC data, is being borne by the Centre and State in 60:40 ratio, for the rest of the beneficiaries the state will bear the entire cost of the premium.

Speaking on the occasion, Captain Amarinder said it had taken his government several months to draw the roadmap for the implementation of the cashless treatment scheme to cover 76% of its population, in sharp contrast to the 12% that would have been covered otherwise under the Central Government’s PMJAY scheme. Similar schemes in other states had covered up to a mere 30% of their population, he pointed out.

The Chief Minister recalled Rajiv’s proactive role in sanctioning approval for setting the first multi-national project in Punjab in the form of Pepsi. “I was then the Punjab Agriculture Minister and had submitted a proposal to PMO for setting up this plant, which was vital for state’s diversification plans. I still remember how, exactly on the eighth day, I got a message that PM wanted to meet me and the project was approved,” the Chief Minister said nostalgically.

Giving details of the Sarbat Sehat Bima Yojana, the Chief Minister revealed it would cover a total of 20.43 Lac smart ration card holder families, in addition to 14.86 lac families enrolled as per Socio Economic Caste Census Data, 4.94 lac J form holder farmer families, 2.8 lac small farmers, and more than 2.38 lac construction workers registered with the state construction welfare board, besides 46,000 small traders. The scheme has also been extended to around 4500 journalists accredited to the state or holding yellow cards.

Equipped with specially designed 1396 treatment packages, the scheme will be implemented through more than 450 empaneled hospitals, including 200 government hospitals.

Of the total premium of Rs. 333 Crores under the Mahatma Gandhi Sarbat Sehat Bima Yojana, the state’s share is 83%, which amounts to Rs. 276 Crores, while the Government of India would be paying the remaining Rs. 57 Crores. Surgical packages under the scheme also include the cost of pre-hospitalization for 3 days and post-hospitalization for 15 days.

Earlier in his welcome address, Health Minister Balbir Singh Sidhu lauded the Chief Minister for taking this historic decision, which would revolutionise the health services in the state. He further said that in case a patient is not carrying e-card, he can go to any empaneled hospital and can meet Aarogya Mitra, who will generate his e-card on the spot and facilitate cashless payment.