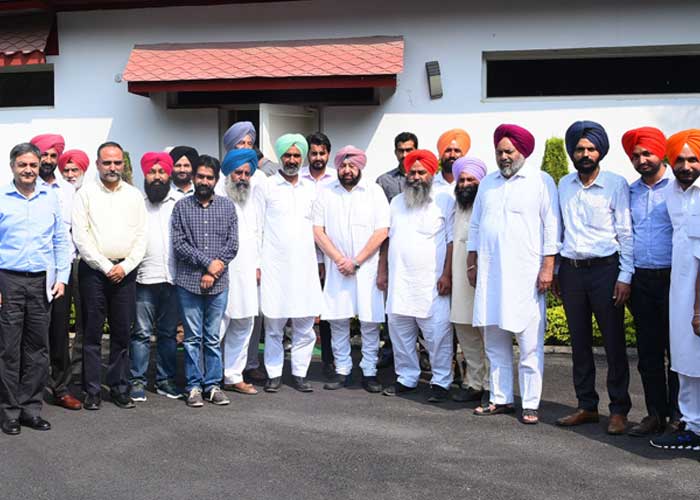 Describing the progressive farmers, who have refrained from burning paddy stubble, as pioneers of change, Punjab Chief Minister Captain Amarinder Singh on Monday called upon them to join the state government in launching a massive campaign to persuade the entire farming community to give up this dangerous practice in the interest of environmental protection for the future generations.

Addressing a group of these farmers, Captain Amarinder Singh said these agents of change had done yeoman’s service to humanity by helping create a pollution-free environment. He said their experiences and expertise must be replicated by one and all to save the fertility of soil on the one hand and prevent environmental pollution on the other.

Emphasising the need to make judicious use of ground water, which was swiftly depleting, the Chief Minister said that it was the duty of the farming community to save water for future generations as otherwise the state would soon become a desert and the entire agriculture economy would be devastated. He stressed that diversification of agriculture, coupled with techniques like drip irrigation, was the only answer to the problem of water depletion.

Lauding the professionals and agricultural technocrats who were taking up Agriculture as a full-time profession, the Chief Minister said that their contribution, especially in putting the latest technological advancements in the field of agriculture into practice, would further motivate the farmers to adopt new techniques to enhance the crop productivity “, both quantitatively as well as qualitatively.

The Chief Minister also complemented the efforts of the Agriculture Department in motivating the farmers to shun stubble burning by creating awareness amongst them. This, he said, had resulted in reducing the incidents of stubble burning by 10 percent last year and a similar trend was expected during the current year too.

Sharing his experience, Surjit Singh, a farmer from village Sadhugarh in Fatehgarh Sahib, said that he was the first to shun the malpractice of crop residue burning in the open fields at a time when modern equipment and farm machinery was not even in vogue.

He underscored the need to educate farmers on a mega scale so as to make them aware about the harmful effects of stubble burning, which not only reduces the fertility of soil but also creates pollution, thereby harming human life.

Gurbachan Singh, a farmer from Burj Deva Singh in Tarn Taran district, highlighted the conservation of air, water and soil, which had been propagated by the first Sikh Guru Sri Guru Nanak Dev Ji, and asked the farming fraternity to follow Guru Ji’s message.

Majority of the farmers urged the Government to reward those farmers who refrained from stubble burning and punish others who recklessly continue to indulge in this malpractice.