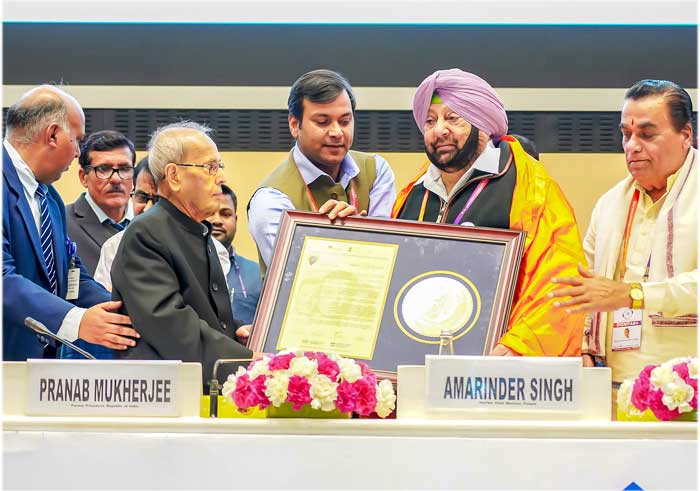 The award was presented to Captain Amarinder Singh by former President of India, Bharat Ratna Pranab Mukherjee, here at Vigyan Bhawan during the valedictory function of 10th edition of 4-day national conclave of BCS. The BCS also acknowledged Captain Amarinder’s profound vast experiences and the values he had practised, which had earned him recognition and eminence in the society.

The award citation read, “Punjab Chief Minister Captain Amarinder Singh have displayed outstanding conviction coupled with revolutionary ideas of clean governance to take Punjab on the path of development. You have constantly endeavoured to improve the social and economic status of the people through your people centric policies.

You have flag shipped the farm loan waiver scheme and organic farming, which have brought in agriculture growth in the state. You channelized the energies of the youth of Punjab by curbing the drug menace.

Quite aware of tumultuous relations between India and Pakistan, you used Track Two Diplomacy in the Kartarpur Corridor incident in 2019. You are an epitome of honesty, integrity and had retained your image that of credible Chief Minister, who delivers on his promises of economic growth coupled with social welfare.”

Addressing the gathering, the Chief Minister exhorted the youth of India to play a constructive role in active politics as it was their duty, as future leaders, to transform the country’s destiny. “Since we are on the way out and you are on the way in, it is your duty to serve your country with firm commitment, sincerity and honesty, upholding the cherished values of democracy,” he told the youth.

Captain Amarinder urged the students desirous of joining politics to be well-versed with the socio-economic as well as demographic conditions of their respective states. “Join politics not for glamour or power but to serve the country or your state to make it better,” he urged the youth.

“Politics is not an easy profession; rather it is a 24X7 job as, being elected representatives, you have to solve the problems of people besides addressing their grievances,” said the Chief Minister.

Recalling his own experience, Captain Amarinder said that though he joined politics back in 1980 as Member Parliament, he realised, after some years, that he should enter the state politics to get a grip over the basic socio-political scenario of his state. He then contested and was elected to the state assembly, he said.

His government in Punjab was facing many challenges, with a hostile neighbour on one side, drug smuggling from Afghanistan and Pakistan, and the slowdown in agriculture, which had been the mainstay of the state’s economy, said the Chief Minister.

He pointed out that Punjab had risen to the occasion to usher in the Green Revolution, and become the nation’s food bowl, when India was forced to import food grains from the United States under PL480 agreement. Punjab also played a vanguard role in safeguarding the sovereignty and integrity of the country from internal as well as external aggressions and earned the epitaph of the country’s sword arm, he added.

It was unfortunate, said Captain Amarinder, that Punjab was divided again after partition, in 1966 when Haryana was carved out of it, causing the state’s industrial development to be badly hit. It was vital for the state to strengthen its industrial sector, for which his Government had taken various proactive measures, resulting in on-ground investment of over Rs 58,000 crore in the past three years, notwithstanding the downturn in the national economy.

Expressing concern over the brain-drain from Punjab, the Chief Minister said its youth were going abroad in search of green pastures – a trend his government was trying to arrest by ensuring gainful employment in the state. “To achieve this goal, we have already developed Punjab as an educational hub with several international universities like Ashoka, Plashka, Amity etc, which would further enable our youth to be gainfully employable across the country,” he added.

Reiterating his commitment to completely eliminate the scourge of drugs, Captain Amarinder noted that his government had successfully broken the back of the drug mafia, thereby choking the supply line. On the law and order front, the state had successfully neutralised 17 terrorist modules, besides stamping out gangsterism from the state, he noted.