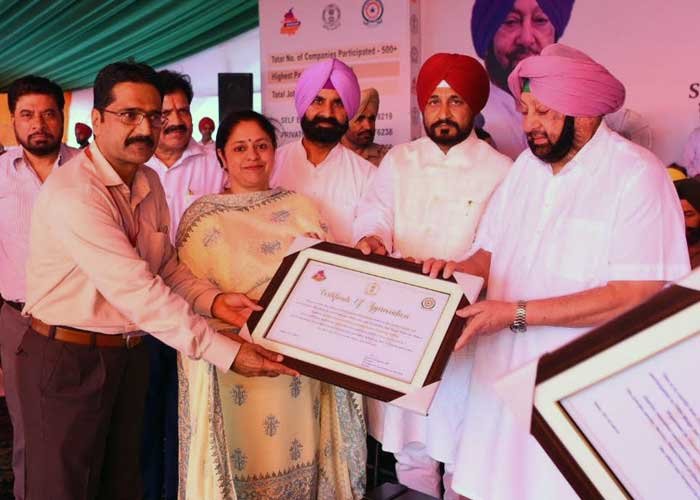 District SAS Nagar, under by guidance of Deputy Commissioner Mr. Girish Dayalan, today touched another milestone, when the Chief Minister Captain Amarinder Singh bestowed upon special award to the district for generating much more employment for the youth than the other districts of the state.

It is pertinent to mention that total 13,300 youngsters of the district had been selected by renowned companies, while 3808 were identified for self employment during recently held 11 day long 5th Mega Job Fairs under the ambitious ‘Ghar-Ghar Rozgar and Karobar Mission’.

Expressing gratitude to the Chief Minister for this coveted award, Mr. Girish Dayalan said that seven Mega job fairs were held in the district from September 20th to 30th, in which 21,977 candidates participated.

Of them, 13,300 were selected and 441 candidates shortlisted by the representatives of multi-national and national companies, 3808 candidates identified for self employment and 520 were selected to impart skill training.

Meanwhile, Additional Deputy Commissioner (General) and CEO, District Bureau of Employment and Enterprises Mrs. Sakshi Sawhney informed that due to the strenuous efforts of the Punjab Government and district administration, leading companies such as Amazon, Maruti Suzuki, ICICI. Banks, Pujara Healthcare and Mahindra and Mahindra reached in job fairs and youngsters got jobs of their choice.