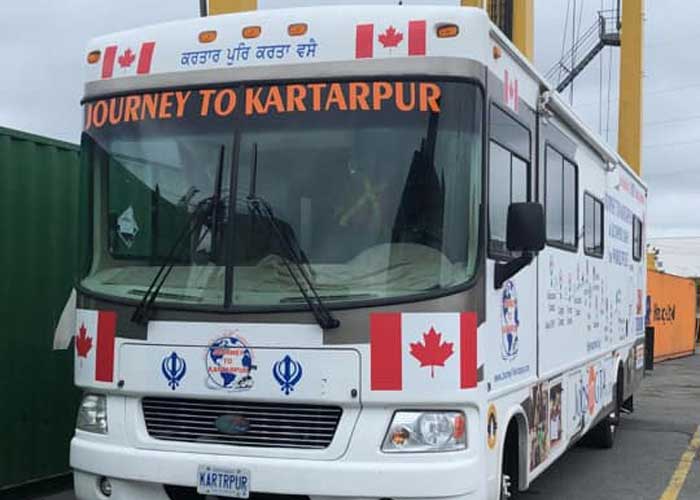 A bus carrying Sikh pilgrims from Canada to Kartarpur in Pakistan for the 550th Prakashotsav of Guru Nanak Dev, has reached Paris.

A Canadian Sikh family arranged a special bus to attend the celebrations of the 550th birth anniversary of the founder of the Sikh religion Guru Nanak Dev, according to a video that went viral on social media. The video shows that the bus has the facilities of a kitchen, dining table, washroom and bedroom.

“Journey to Kartarpur” is written on its front side. It has got the map of the route that the bus is taking from Canada to Sultanpur Lodhi in India via Kartarpur, the Dawn newspaper reported.

The map shows the bus crossing the Atlantic in a ship. It shows the bus going to London, UK, France, Germany, Switzerland, Austria, Turkey and Iran before reaching Kartarpur. It is scheduled to arrive in Sultanpur Lodhi in India in November.

The bus started its journey from the city of Brampton in Canada on September 3.

The Canadian Sikh family will also attend the opening ceremony of the Kartarpur corridor and will then return to Sultanpur Lodhi, India again.

The ten-member team is being led by Gurucharan Singh.

A Facebook page says that Journey to Kartarpur & Sultanpur Lodhi is a non-profit initiative by the International Punjabi Foundation Canada.

The Kartarpur gurdwara, located on the bank of the Ravi river in Pakistan, is about four km from the Dera Baba Nanak shrine in India’s Gurdaspur district, and about 120 km northeast of Lahore. Guru Nanak had lived there for 18 years until his demise in 1539.

The corridor will allow pilgrims to travel from the Dera Baba Nanak shrine in Gurdaspur district to Gurdwara Darbar Sahib in Kartarpur in Pakistan.  (Agency)