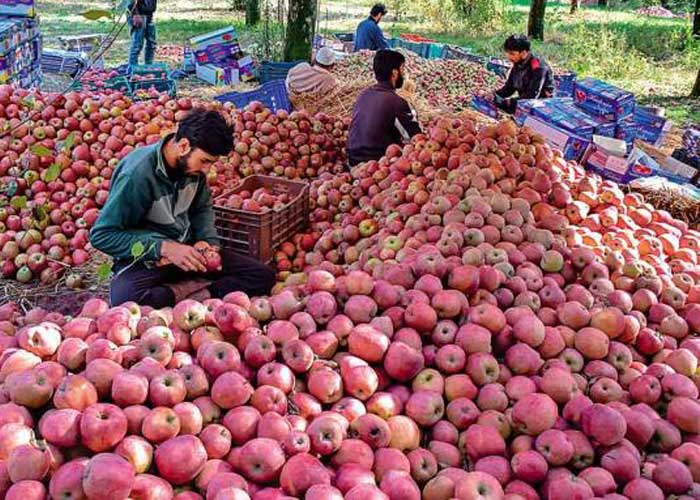 Nearly two months after the revocation of Article 370 and 35A in the erstwhile state of Jammu and Kashmir, scores of broke Kashmiri students here have resorted to a novel initiative – selling Kashmiri apples to make some extra cash for survival.

A truckload with 17 tonnes of luscious organic apples from Doda, sent through the J&K Agriculture Department, reached here on Wednesday for sale in the local markets.

“These apples – of three different qualities – were simply loved by the people here and have sold out like hotcakes. Encouraged by this, we have ordered another truck which will reach here by Friday,” NGO ‘Sarhad’ chief Sanjay Nahar told.

The truckload of apples were segregated into three different qualities as per their size and offloaded in the local markets for Rs 50, Rs 75 and Rs 100 per kg, respectively – considerably cheaper than the range available through the regular marketing channels.

He said after deducting all expenses including transportation and unloading, the remaining money estimated to be around Rs 9,00,000 for the maiden consignment – shall be directly deposited in the bank accounts of the farmers in Doda from whom the apples were sourced.

“Now, we shall set up out own stalls in Grahak Peth, Mahavir Jain Vidyalaya and Arnyshwar Sahkar Nagar which will be manned by the Kashmiri students. They will be given an honorarium of Rs 600 per day for their services,” Nahar added.

Terming this as a win-win situation for both the Kashmiri farmers and the students in Pune besides the consumers, Nahar and other Kashmiri volunteers plan to expand it to other districts shortly.

One of the Kashmiri students, Adil Mir has set up a five-member team to work out the quality control details of the consignments coming from the farmers to the consumers here.

“Within the next 3-4 months, we hope to establish a quality control laboratory at a convenient location in Kashmir where the fruits consignments shall be graded and costs worked out before dispatching them to Maharashtra for marketing,” said Mir.

The initiative has already excited Puneites who are now demanding more – different varieties of apples, apricots, walnuts, the prized saffron and other fresh or dry fruits for which the newly-declared union territory has been famed since centuries, said ‘Sarhad’ activist Javed Wani.

Nahar and Mir said that presently, around 50 students – who have little or no resources to survive – have volunteered to sit in stalls and sell the Kashmiri agro-products.

“Around 65 per cent of the 500 students in Pune have financial problems and this initiative will help them a lot. Some are unable to afford their daily expenses and college fees after the recent developments in their homeland,” Nahar explained.

Mir added that if the current pilot project in Pune succeeds, they would venture out to other neighbouring districts with the help of organisations like Swabhimani Shetkari Sanghatana and others to make available Kashmiri farm produce directly to the consumers here.

“If everything proceeds smoothly, we may diversify to Kashmiri handicrafts, artworks, carpets, and other items that are in great demand worldwide to get them directly from the manufacturing locations to the markets here,” another student Zahid Bhat told.

Besides Pune there are around 3,000 Kashmiri students living and studying in the state, including some 300 in Mumbai, and a majority are virtually cut-off from their families without monetary resources.  (Agency)