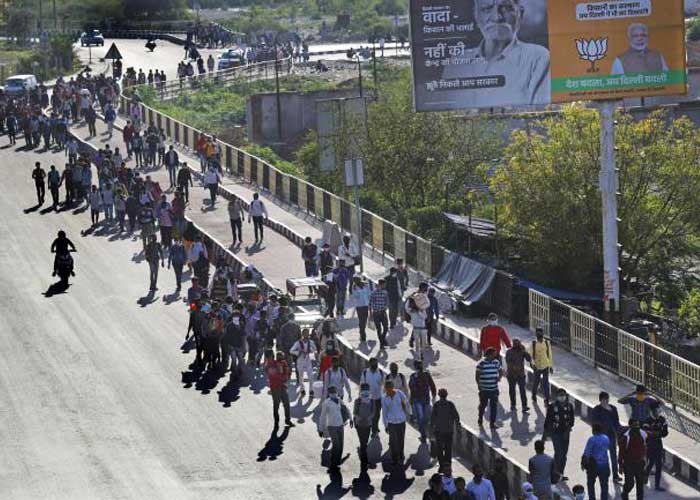 Thousands of labourers were left stranded at several places in Delhi and neighbouring Ghaziabad and Greater Noida on Sunday as the Central government asked states to strictly follow the 21-day nationwide lockdown and stop the movement of people across the cities.

Those who had already come out of their homes to take any transport to return to their native places are now clueless as the border of Delhi with the Uttar Pradesh were sealed at 2 p.m. on Sunday.

However, the number of people willing to return to their homes was less than on Saturday, but with the lack of announcement from the state government, the people were left stranded either at the Anand Vihar bus stand or at the Ghaziabad border or at the Noida-Agra Expressway.

Many stranded people told that they were not being allowed to go towards the Anand Vihar bus terminal and were asked to travel towards Ghaziabad, from where they will get a bus.

Many of them, then, had no option but to walk back to their homes. Some groups wanted to travel to their home in Jhansi, Amethi, Gonda and Bahraich.

Pradip Singh, a resident of Amethi in Uttar Pradesh said, “I was a labourer and now I want to go back to my home as I have nothing to eat.”

“Look at my baby,” Singh said, pointing at his one year-old daughter. “We don’t have food, and even if the landlord does not ask for rent, how will I pay for food for my family,” he said, adding “we don’t want to die here without food”.

He is walking home along with 20 others from the district.

Phula, a resident of Jhansi, holding her kid in one arm and luggage on the other, near the Mayur Vihar metro station told, “There is no bus available now.”

Jhula is travelling along with other 15 members of her village from Anand Vihar to Jhansi via Mayur Vihar. “In our village, we can have bread and salt, but here or in other cities, we would not get any help,” she said.

There are others with family members, including small children, who who are walking along the highway with no water and food. Jhula said she, like others, had carried some eatables. “But in this heat, the eatables too have gone waste. Passers-by have given us some biscuits and water bottles,” she said.

Abhimanyu Dubey, a resident of Gonda in Uttar Pradesh, has a similar problem. “We heard yesterday that Yogi-ji (Chief Minister Yogi Aditynath) has promised a bus service to ferry people from Delhi to respective towns. So our kids and family members told us to take the bus and come back home, and so I set out from my Khureji Khas room in Delhi to Anand Vihar, but no one has informed us from where the bus will go,” he said.

He said he was not allowed to even go to the Anand Vihar bus stand. He said he will have to now walk it to his home district.

Earlier in the day, the Centre directed states to strictly follow the nationwide lockdown and stop the movement of people across cities, advising them to arrange shelter, food and other facilities for migrant labourers at their workplace.

The direction came amid mass migration of labourers from cities to their villages in Uttar Pradesh and Bihar after Prime Minister Narendra Modi on Tuesday announced a 21-day nationwide lockdown to break the chain of transmission from coronavirus pandemic.

Noting that there has been movement of migrant workers in some parts of the country, Cabinet Secretary Rajiv Gauba through video conferencing with officials of Ministry of Home Affairs, state Chief Secretaries and Directors General of Police on Sunday morning decided to “seal” the district and state borders.

“Directions were issued that district and state borders should be effectively sealed and states were directed to ensure there is no movement of people across cities or on highways,” said a government statement.

Following directions from the Centre, state borders were sealed to stop the mass migration.

Salim, a resident of Bahraich in Uttar Pradesh, said the truck in which over 70 people were travelling has ben stopped by the police at the Ghaziabad border. “We are stuck here and we don’t know if we would be able to go towards our home district,” said Salim.

Many like Salim have little faith in government claims that their food and shelter would be arranged in Delhi. “We want to go back to our homes. We don’t want to die in a foreign land. If something happens to us, our family would not be able to know our whereabouts,” said one of them.

Hundreds of them — women and children included — are ready for a journey of hundreds of kilometres — on foot.

Finance Minister Nirmala Sitharaman has announced a Rs 1.7 lakh-crore relief package on Thursday to aid those who live on the margins, but panicked labourers remain unconvinced.  (Agency)