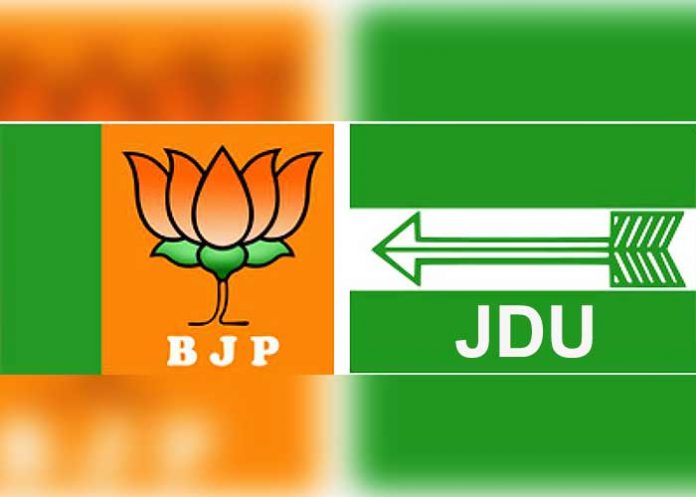 New Delhi, Oct 25, 2020-
The NDA is comfortably returning back to power in Bihar with a clear majority but the remarkable twist is that BJP is emerging as the single largest party much ahead of Chief Minister Nitish Kumar led JD-U.

As per the opinion poll data of Bihar state elections released by IANS ABP-CVoter Saturday, Nitish Kumar led NDA comprising JD-U and BJP alliance will get 135-159 seats in the assembly elections, getting a clear majority.

The BJP will be the largest party in the assembly as per the opinion with 73-81 seats while JD-U will get between 59-87 seats.

As per the opinion poll, RJD-Congress-led Mahagathbandhan alliance will get 77-98 seats. Chirag Paswan’s LJP is an also ran with a projection of 1-5 seats while other parties get 4-8 seats. Tejashwi Yadav led RJD is projected to win the lion’s share of 56-64 seats while the Congress will win 12-20 seats.

The range of seats projections in the political regions based on Lok Sabha mapping shows the NDA will get between 16-20 seats in East Bihar, 36-44 in Magadh-Bhojpur, 27-31 in Mithilanchal, 45-49 in North Bihar and 11-15 in Seemanchal region.

The poll sample size is 30,678 and the period of the survey is October 1-23. The total tracker sample size is 60,000 plus in last 12 weeks. The methodology is covering all 243 Assembly segments and the margin error is +/- 3 per cent at State level and +/-5 per cent at regional level.

Data is weighted to the known Census profile, including Gender, Age, Education, Rural/Urban, Religion and Caste apart from the voting recalls for last Lok Sabha and Vidhan Sabha elections. (Agency)