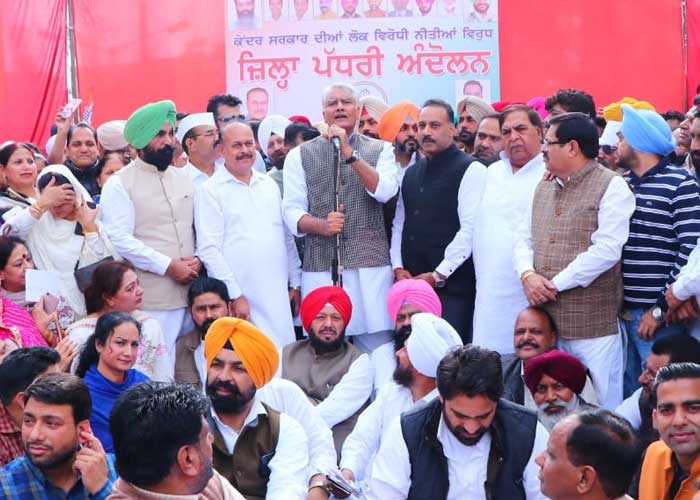 He alleged that the Union government is wilfully ignoring the interests of the government departments/institutions and is instead promoting big corporate houses. Besides, the BJP has caused huge damage to the backbone of Indian economy by implementing GST and demonetisation, due to which the residents are suffering.

While addressing a dharna organised by the Congress party against the Union government outside the District Administrative Complex, here, Mr Jakhar said that the UPA government under the leadership of former prime minister Dr Manmohan Singh had worked hard to stabilise the Indian economy. But ever since the BJP led NDA formed government at centre, it has destabilised the Indian economy to an extent that it would take ages to stabilise it.

He alleged that government institutions such as BSNL, Indian Oil, BPCL etc are being targeted wilfully by the Union government so that the select corporate houses are benefitted. He stated that if these institutions shut down, lakhs of workers would become jobless.

He informed that Prime Minister Narendra Modi had promised 2 crore jobs for unemployed each year, while on the other hand, he is formulating such policies that the already employed in government sector are finding it difficult to save their jobs.

Mr Sunil Jakhar said that to check the menace of stubble burning, the Union government should also come forward to help the farmers financially. He said that the Supreme Court of Indian has directed an additional compensation of Rs 100 per quintal for farmers who do not burn paddy stubble. He said that the Union government should share this additional financial burden of Rs 1700 crore if they actually want to help the farmers.

He also said that it is wrong to state that the Punjabi farmers are responsible for causing air pollution. He appealed to all office bearers and workers of Congress party to educate the masses about the anti-people policies of the BJP led Union government.