Home Punjab Be ready to face Lok Lehar if you scrap free power to... 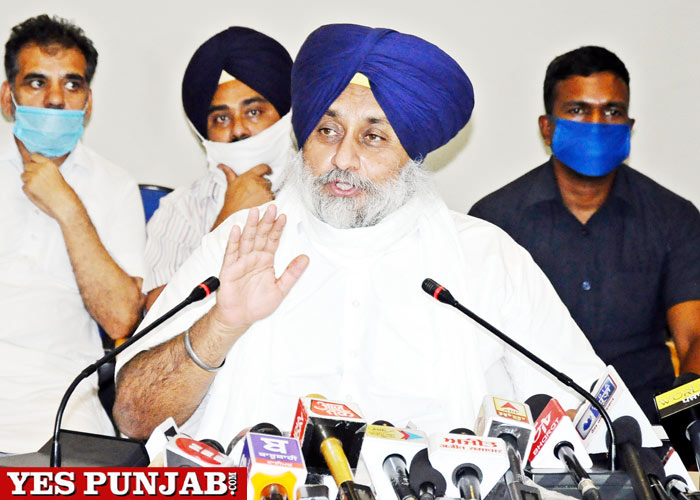 The Shiromani Akali Dal (SAD) today warned the Congress government in Punjab against breaking the back of the beleaguered peasantry by scrapping the free power facility and asked it to be ready to face a state-wide mass movement (Lok Lehar) by the SAD on this issue.

The Core Committee, which was chaired by party President Sukhbir Singh Badal, also demanded a comprehensive package for the poor sections by the Punjab government. “The Congress government has showered its bounty on the rich and the corrupt including liquor contractors (Rs 676 crore) and land mining mafia (Rs 84 crore) but has not given a penny to farmers, labourers, domestic power consumers or the industry”, said the Core Committee”

A resolution passed at an emergency meeting of the Core Committee here this afternoon declared that “If the Congress government remains stubborn and tries to force this decision on farmers through the backdoor under the pretext of cash subsidy to farmers, the SAD will not remain a mute witness to it”.

It also dismissed the statement of chief minister Capt Amarinder Singh that the Punjab Council of Ministers had never contemplated any move to scrap the free power facility for farmers and replace it with a Direct Benefit Transfer scheme as “false, mischievous and deliberately misleading”. It said all leading newspapers, television channels and social media portals reported this murderous anti-farmer decision.

“Even some Punjab ministers confirmed this decision but blamed it on the Union government. But when the SAD declared that it would launch an agitation against the government, the Chief Minister and the state government panicked and felt compelled to deny the move.”

Another resolution lashed out against the chief minister saying “there is something instinctively anti-people and anti-farmer in the CM’s psyche. He has always been looking for excuses to impose taxes on the poor and introduce power bills on farmers’ The SAD will never allow him to succeed in his anti people and anti farmer policies.

The Core Committee said that there were important ministers in Capt Amarinder Singh’s cabinet who had always proudly advocated the scrapping of free power facility to farmers. “During the Akali – BJP regime also, the then FM Manpreet Singh Badal had been used by Union Finance Minister Pranab Mukherjee to put pressure on the SAD-BJP government to impose bills on farmers.

But Sardar Parkash Singh Badal categorically declared in the assembly that Alkalis would rather sacrifice their government than crush the already beleaguered peasantry with this unbearable burden. Manpreet was expelled from the SAD on this issue and later joined the Congress where he has natural allies for his anti-farmer ideas.” The free power for tube wells for Punjab farmers was introduced by S Parkash Singh Badal-led SAD-BJP government in 1997.

In another resolution, the Core Committee lashed out against the Congress government for the shocking seed scam which has jeopardized the future of farmers in the state. The resolution said that the principal culprits in the scam – Brar Seeds and Karnal Seeds continued to function normally despite the “Sarkari Tamasha of FIR against them. The Core Committee rejected the SIT formed to probe this, saying it was a mere cover up exercise and aimed at allowing the accused to eliminate vital evidence.

The Committee said since the scam had inter-State ramifications and involved playing with the lives of farmers only a CBI inquiry could bring out the truth in the case. It also demanded custodial interrogation of the accused.

The Core Committee also passed a resolution blasting the Congress government for being hand in glove with the perpetrators of the liquor scam which has cost Punjab a loss of Rs 5600 crore. “The scam is patronised by the MLAs of the ruling party and the hot-spot of the scam is in Rajpura and Patiala. But no action is being taken against those indulging in the loot of the State treasury”.

The Committee also noted that the government had tried to put a lid on the scam by stating that the standoff between the ministers and the chief secretary had been resolved. It demanded that people wanted to know who was responsible for the Rs 5,600 crore scam and said only an independent inquiry could bring out the truth.

The Committee also demanded an inquiry into the loot of the foodgrains sent for 1.4 crore Punjabis by the central government. It said these foodgrains had been diverted to the houses of Congressmen and had later found their way into the open market.