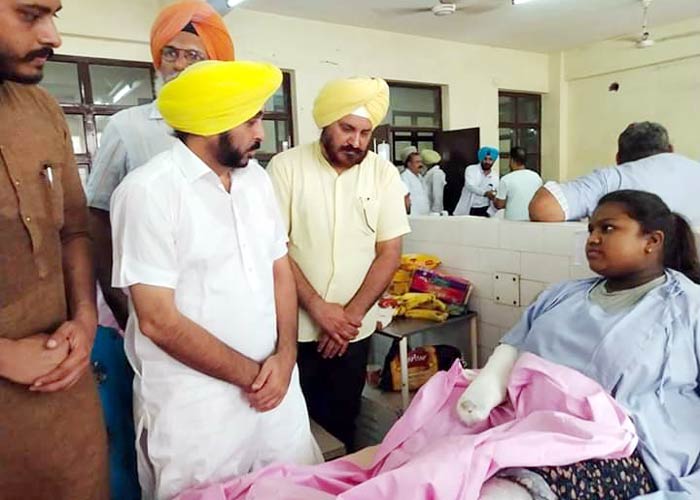 State president of the Aam Aadmi Party (AAP) and parliamentarian Bhagwant Mann, on Friday paid a visit to the aggrieved families of those who lost their lives in the Batala firecracker factory blast and those grievously injured in the blast and were recuperating at the local civil hospital here.

Interacting with the injured at the hospital and sharing the trauma of family members of those who lost their lives, Mann said the governments, the lax local and police administration were squarely responsible for the loss of life and property, saying the tragedy could have been averted had the administration shunned its laidback attitude and taken the onus of putting in place the safety and security mechanism ahead of the happening of the heart-wrenching tragedy.

Mann said that government, as usual, could be seen going into an overdrive only after the tragedy striking and taking its toll on human lives and property, stating that if the government had performed its statutory duties that of a savior towards the people of the state, the tragic incident could have been kept at bay.

Mann said that to check the recurrence of such disastrous misadventures, all state and central governments needed to learn lessons from the Batala blast and the trail of devastation it left behind in the aftermath.

Mann demanded that the Captain government needed to take an urgent call on identifying small and big firecracker and other explosive material manufacturing factories in the state and relocating them from the densely-populated areas and set them up at designated focal points and industrial zones under the government subsidy scheme so that the Batala horror was not repeated in the near future.

On the occasion, Mann called upon all religious organizations, including the Shiromani Sikh Prabndhak Committee (SGPC), and Akal Takht Jathedar Sahibans to make a fervent appeal to the ‘sangat’ (Congregation) to shun the use of firecrackers during the special occasions and make them aware of the disastrous outcome use of explosives and fire crackers saying the use of such combustible material was detrimental to the environs and ecology besides an open invitation to disasters.

Visibly shaken by the incessant shrieks and sobs of the members of the aggrieved families, Mann said that besides the loss of innocent lives, extensive damage was done to houses, business establishments, workshops by the blast and the loss appeared to be in worth crores. He demanded the government should ensure ex gratia payments of one crore to the next of kin of the deceased, and 100 compensation to the victims who lost their shops and workshops, houses and other properties.

Addressing media persons on the occasion, Mann said Batala, like a host of other cities and towns in the state were sitting on the tinderbox with the unauthorized firecrackers and other explosive material manufacturing units illegally operating under the nose of the governments.

He demanded that the government should also put in place preventive measures to check chances of such macabre incidents ahead of Diwali and cautioned people at large to keep themselves away from the disastrous impacts of the explosives.