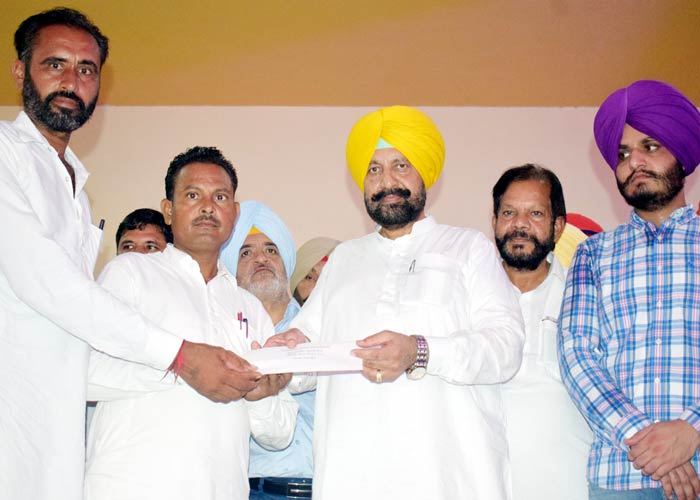 Addressing the mammoth gathering of Sarpanches and Panches at the function here, Mr. Sidhu said that Captain Amarinder Singh led Congress Government is committed towards the overall development of all cities and villages of the state without any prejudice.

In his address, the Health Minister said that since he was designated as the in-charge of the district Fazilka, he had visited district several times to feel the pulse of the hardships of the citizen.

Hitting at the previous SAD-BJP government for its callous and discriminatory approach in distributing the welfare grants, Mr. Sidhu said that partisan attitude of the Akalis had casted catastrophic effect on the development of this areas.

He said that now, under the visionary and dynamic leadership of Chief Minister Captain Amarinder Singh, all the parts of the Punjab were getting equal importance in disbursing of welfare grants. He made special mention of the making of smart cards for Atta-Dal Scheme, e-cards under Sarbat Sehat Bima Scheme for all the eligible beneficiaries of the state without any prejudice.

Mocking at the Akalis, he said that though during SAD-BJP government, Health Minister belonged to district Fazilka, but this district remained short of doctors and the position of sanctioned doctors remained unfilled. He said that now the scenario is altogether different and there is no scarcity of doctors. He assured the citizen that the remaining vacant posts of specialist doctors would soon be filled.

Highlighting the flagship Sarbat Sehat Bima Scheme of the Punjab Government, the Health Minister said that 46 lakh families of the state had been brought under the ambit of this ambitious health insurance scheme and each family could avail annual health insurance of Rs. 5 lakh per annum.

He exhorted people that if you want continuous development of the state, then strengthen the hands of the Captain and ensure win of Congress candidate from Jalalabad constituency so that I could get maximum grants for the constituency and district as well.

Fazilka MLA Mr. Davinder Singh Ghubaya and District Congress President Mr. Ranjam Kamra have extended their gratitude towards Mr. Balbir Singh for the Punjab Cabinet approval for expansion of Suhelawala distributory with the cost of Rs.13.52 crore to strengthen the canal irrigation system in Jalalabad.

Similarly, Deputy Commissioner Mr. Manpreet Singh Chhatwal said that due to the personal intervention of the Health Minister, the government offices in Jalalabad have been brought under one roof. He thanked the Health Minister to resolve the problems of the people of the district on priority.

“This will obviously save precious time of people”, he added. He also planted sapling to make the new office premises green and clean and exhorted Deputy Commissioner to plant more plants in the complex. After this, the Health Minister visited ‘Saadi Rasoi’, which is recently established in Jalalabad.

Deputy Commissioner Mr. Manpreet Singh Chhatwal apprised the minister that Saadi Rasoi was started in Jalalabad last month after the successful Fazilka project. He said that home-like food is being served at Rs.10 only and 8255 needy people have taken meal from the kitchen so far. Appreciating district administration endeavour, the Health Minister suggested that such projects should be started in other places of the district too.