Home Punjab Badal thanks Modi for slashing Sikhs’ Black List, says would have been... 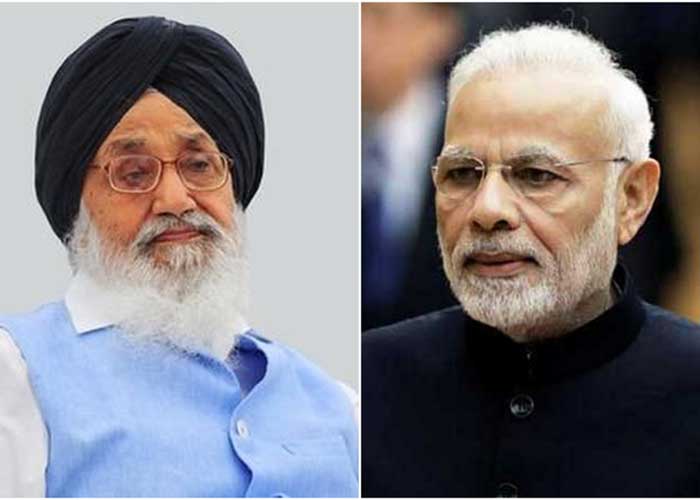 Thanking the Narendra Modi-led Government of India for slashing and effectively dumping the “inhuman, insane and utterly discriminatory Black Lists of the Sikhs”, the Five times Chief Minister of Punjab and Akali stalwart Sardar Parkash Singh Badal today described the decision as “ a far-sighted act of great statesmanship which will strengthen the forces committed to preserving and promoting the spirit of federal diversity and tolerance in the country.

Mr Badal said that he would have been personally very happy if this and some other decisions like punishing the killers of Sikhs such as Sajjan Kumar and the other accused like Kamal Nath had come during Sardar Manmohan Singh ji’s government. “ The SAD and the Government headed by me persistently asked for the Black Lists to be scrapped during Sardar Sahib’s Prime Ministerial tenure. But nothing happened.”

Refusing to be drawn into a race for ‘claiming credit’ for the NDA government’s decision, Mr Badal said,” It would not behove me or anyone else in the SAD to claim credit for the decision because this is our own decision as we are a part of the NDA government at the highest cabinet level and are a party to every decision.

In addition, the Prime Minister Narendra Modi ji has always been ‘kind and gracious’ in consulting me personally on all important decisions concerning Punjab and more especially those concerning the patriotic Sikh community.

People may have forgotten but Mr.Modi had publicly promised at a global function in Ahmadabad in 2013 to restore the place of dignity and high respect to the brave and patriotic Sikh community. He was then responding to my request to him to move to the national politics as I knew how positive and sensitive he has always been to Sikh demands.”

Mr.Badal said that the had no problem with any Congress Chief Minister claiming credit for the NDA government’s decision. “But it is very unfortunate that far from working to get the Black Lists of overseas Sikhs cancelled, the Chief Ministers of the Congress party had insulted, cold shouldered and refused to meet even the non-Black Listed eminent NRI Sikhs like Mr Harjit Singh Sajjan who had been hosted by the Government of India.

There is a problem with the Congress Sikh leaders’ mindset about their own community. It is as if they suffer from a guilt complex for being Sikhs and Congressmen at the same time, and they try to cover this guilty and prove their loyalty to their High Command by anti-Sikh gestures such as insulting the Canadian Sikh ministers.”

The former Chief Minister said that the decision on slashing the Black Lists is a part of the vision which envisages restoration of pride of the Sikh community and ensuring justice to it, and this vision is reflected in many of the decisions of Mr Modi’s government, notably in starting the process of punishing the guilty of the massacre of thousands of innocent Sikhs by the Government sponsored Congress goons in 1984.

The same approach has seen the Government of Indian going out of its way, through the Kartarpur Sahib Corridor, to realize the dream of the Sikh masses for “Khulle Darshan Deedar and Seva Sambhal of our sacred and historic Gurdhams” such as Nanakana Sahib, “said Mr Badal.

Mr Badal said that there is basic and diametric difference between the Congress and the NDA governments on the “political vision and approach “ towards the Sikhs. “The BJP had paid a huge price for standing by the Sikh community during the horrific days of November 1984 massacre by Congress goons.

The Congress had defamed this party by calling it a supporter of “Gaddaars”, the term which Rajiv Gandhi’s followers used against the Sikhs, and the BJP was reduced to just two MPs. We the Sikhs have never forgotten the sacrifice this party made for us then,” said Mr Badal.