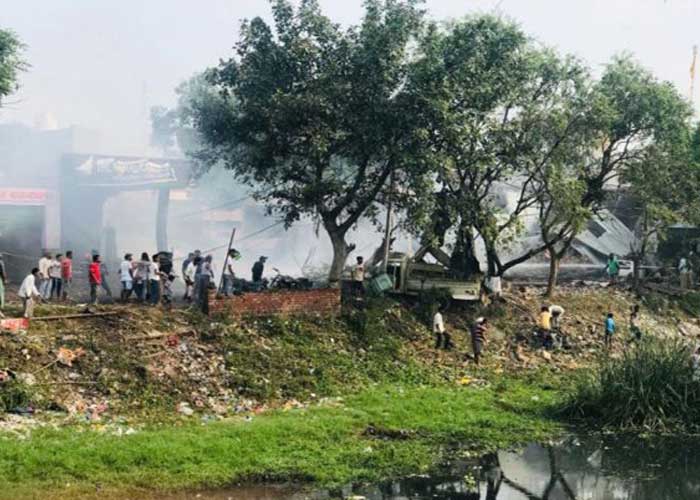 At least 21 people were killed and 26 injured in an explosion following a blaze at an unauthorised firecracker manufacturing unit in a densely-populated residential area in Punjab’s Gurdaspur district on Wednesday, an official said. Two people are still missing.

The dead included the firecracker manufacturing unit’s owner and six of his family members.

Rescue workers, including National Disaster Response Force personnel, were on the job to retrieve two missing people from the badly-damaged building located next to the totally damaged firecracker unit in Batala town of the district, Deputy Commissioner Vipul Ujwal told the media at the spot.

He said seven grievously injured were referred to the Guru Nanak Hospital in Amritsar.

A number of nearby buildings, including a car workshop, were badly damaged in the explosion. An elderly woman and her grandchild, who were passing close to the disaster spot, were among the dead.

The cause of the blast, which damaged the buildings in radius up to 200 metres, is yet to be ascertained, police said. Even a few stranded vehicles were flung up in the air with the blast.

Cabinet minister Sukhjinder Singh Randhawa, who reached the accident spot, announced a compensation of Rs 2 lakh to the next of kin of the dead and Rs 50,000 for the injured.

The government ordered a magisterial probe into the incident.

Locals complained the firecracker unit was running illegally for the past many years. It were manufacturing and storing crackers for a ‘nagar kirtan’ – a religious procession relating to the birth anniversary celebrations of Sikhism’s founder Guru Nanak Dev – slated to reach the town late Wednesday evening.

“The firecracker factory has been working in this locality for the many years. We have complained against the factory seven-eight times to the local administration, but no action has been taken against it,” a local resident told the media.

He said a similar blast occurred in this area in January 2017, leaving one person dead and three injured.

Expressing anguish over the loss of lives, Chief Minister Amarinder Singh said rescue operations were underway with the Deputy Commissioner and the Superintendent of Police heading the relief efforts.

Gurdaspur MP Sunny Deol too expressed grief over the blast.

“Saddened to hear about the news of blast in Batala factory. NDRF teams and local administration has been rushed for rescue operation,” Deol tweeted.  (Agency)