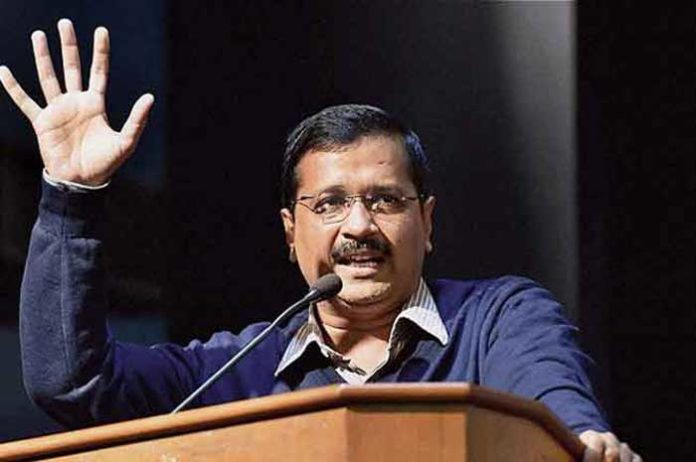 Delhi Chief Minister Arvind Kejriwal on Sunday signalled his Aam Aadmi Party’s expansion at the national level, saying a time will come when India’s fame will resonate across the world as the results of the Delhi election is the beginning of a new kind of politics.

The national convener of the AAP made his remarks in his speech at Ramlila Maidan after taking oath as the Chief Minister of Delhi for the third time in the presence of a huge gathering.

“I have a dream that India’s fame will resonate in the whole world be it London, Tokyo, Australia, Africa or America. It will be possible with this new politics which you people began in this Delhi election,” Kejrwal said while addressing the gathering.

Kejriwal also hit out at the opposition for criticising him for giving freebies, saying “God himself provided us valuable things for free” and questioned “should I seek money from my children studying in government schools or money from those poor people approaching Delhi hospitals to cure their diseases?”

Hinting at his national ambitions, Kejriwal also said when every Indian gets security, health, education and employment, only then will the tricolour flutter proudly.

Kejriwal at his swearing in ceremony on Sunday asserted he would work for the next five years in coordination with the Centre without discriminating against those who did not support his party during the recently-concluded Delhi Assembly polls.

Calling his victory a success of every Delhiite, Kejriwal said he is the Chief Minister of everyone even if they voted for AAP’s rivals Bharatiya Janata Party (BJP) or Congress.

“I am the Chief Minister of all who voted for AAP, BJP or Congress. I want to tell all the two crore people of the Delhi that you all are my family. It does not matter from which party you belong or from which caste, creed, or region you come. No matter if you are poor or rich,” Kejriwal said.

In his 20-minute speech at Ramlila Maidan, Kejriwal said: “I will work for everyone for the next five years.”

Kejriwal appealed to all political parties to forget things that happened during the run up to the polls and sought their help for the development of the capital city. He announced to work in coordination with the Centre and also urged Prime Minister Narendra Modi to help his government for Delhi’s progress.

“All parties should forget the past things and support this government for the progress of Delhi. We want to work in coordination with the Central government. I invited the Prime Minister for my swearing-in ceremony. I also urge the Prime Minister to help us in the development of Delhi,” Kejriwal said.

The Aam Aadmi Party (AAP) national convener took oath as Chief Minister in a grand ceremony at the Ramlila Maidan for the third time in presence of a huge gathering.

The AAP got a massive mandate in the Delhi polls as it was elected in 62 of the 70 Assembly constituencies here while the BJP managed only eight seats and the Congress again failed to get a single seat.

Kejriwal said immediately after his swearing-in that the future electoral politics in the country will be based on the development plank. “Delhiites, you have given birth to a new brand of politics — the politics of performance, of setting up schools, healthcare facilities, providing water, power, and women’s security.”

Kejriwal also extended an olive branch to the Centre, indicating his eagerness to work with the BJP-led government for Delhi’s development. “I had invited the Prime Minister to today’s event, but he could not make it. I seek his blessings for Delhi’s progress and development,” he said, indicating his intention to let bygones be bygones.

The AAP and BJP had fought a bitter battle in the run-up to the Assembly polls held on February 8.

Kejriwal’s speech also hinted at his national ambitions. He said, “When every Indian gets security, health, education and employment only then will the tricolour flutter proudly.”

The crowd composition at Kejriwal’s swearing-in ceremony was a tribute of sorts to the strata of society that have stood by him in the no-holds-barred electoral battle with the BJP.

In his speech, Kejriwal acknowledged the role that the common people play in the development of Delhi.

During the course of his speech, Kejriwal specifically mentioned names of an IIT student, a former teacher who is presently farming, a metro rail pilot, and city bus marshal. Kejriwal said that it is people like them that run Delhi, not the politicians.