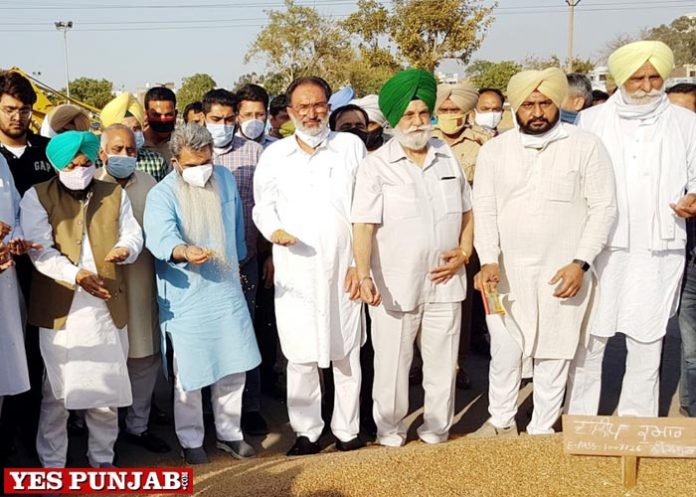 Rajpura / Patiala, April 10, 2021 (Yes Punjab News)
Bharat Bhushan Ashu, Minister for Food, Civil Supplies and Consumer Affairs, while formally kicking off the procurement of wheat in Punjab from Dana Mandi Rajpura today, said that as per the directives of Punjab Chief Minister Captain Amarinder Singh, farmers and arhtiyas would not face any problem during the entire procurement operation.

Reiterating firm commitment of Punjab government for smooth and hasslefree procurement of wheat, the Minister said that state government is committed to procure each and every grain. For this purpose about 4000 procurement centers have been set up across the state for expected arrival of 135 Lakh MT of wheat, he added.

He said that the Arhtiyas were, are and will be an integral part of procurement process in the state and the revised portal developed by the Food and Supplies Department for this purpose has also got the approval of the Chief Minister Captain Amarinder Singh. On this occasion, MLA Rajpura Hardial Singh Kamboj, MLA Ghanour Madan Lal Jalalpur and President Arhati Federation Vijay Kalra were also present.

Mr. Ashu said that in view of the newly imposed restrictions and pressure from the Central Government, the sense of uncertainty among the farmers and arhtiyas regarding the procurement of wheat has come to an end today with the commencement of wheat procurement in the state. He thanked the Punjab Arhtiyas for withdrawing their strike in the interest of the farmers and thanked the President of the Arhati Federation Vijay Kalra for accompanying them.

He said that the Finance Department has already asked for immediate release of Rs. 131 crore to the Arhtiyas that was stopped by FCI for non-uploading of details by the arhtiyas.

He further said that the Chief Minister Captain Amarinder Singh also assured the arhtiyas that the issue of 30 percent labor cut by FCI would also be taken up with the Central Government.

He applauded the decision of the Arhtiyas of Punjab to end their probable strike today and participate actively in the procurement process, saying that it has saved the farmers from a huge loss. By doing so, they have also expressed their commitment to the farmers by honoring and strengthening their old ties with them.

Expressing commitment on behalf of the Punjab Chief Minister Captain Amarinder Singh, he said that the Punjab government had always stood by the farmers, laborers and arhtiyas and was still with them.