Home Punjab Appointment of 6 MLAs as Advisors – Majithia terms it as day... 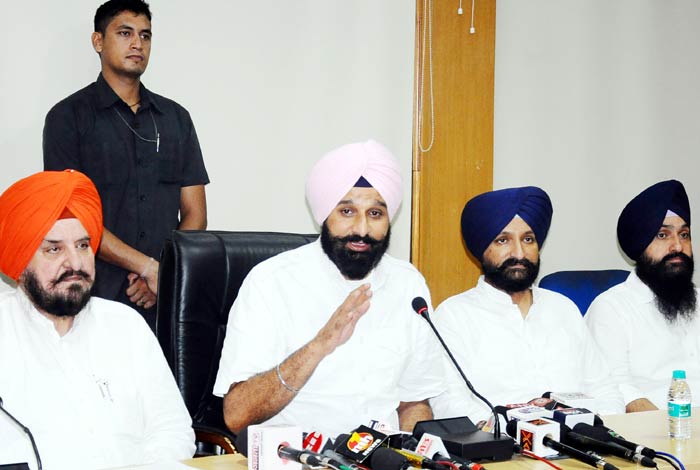 The Shiromani Akali Dal (SAD) today condemned the Congress government for burdening the State exchequer with the appointment of six legislators as Advisors in the rank of ministers at a time when it was unable to give mid day meals, SC scholarships, social welfare benefits, sugarcane dues, DA allowance or even release money for the flood hit or for celebrating the 550th Parkash Purb of Sri Guru Nanak Dev ji.

Addressing a press conference here, former minister Bikram Singh Majithia said it was shocking that the Congress government had appointed five legislators as Advisors in the rank of cabinet minister and one legislator as Advisor in the rank of Minister of State at a time when it was denying due benefits to each and every section of society. “It seems the Congress is only fixed on saving its government from immediate collapse and has in this process even decided to fritter away the scarce resources of the State to its party men.

This amounts to day light robbery of the State exchequer”, he said adding that with the latest addition the total number of political appointees in the government had risen to 26 with there being twelve Advisors, four Political Secretaries, 9 OSDs and one CPS.

Questioning the very logic of the move except to fatten its legislators at the exchequer’s expense, Mr Majithia asked “what advice can a one time or even two time legislator offer to a two time chief minister (Capt Amarinder Singh). Is the Congress party’s thought process so bankrupted and has it become so devoid of morality and ethics that it is ready to slash the throat of the common man to save itself from imminent collapse?” he asked.

Asserting that this desperate act was borne out of frustration after failing to fulfill the promises made to the people due to which Congress legislators were finding it difficult to face the electorate, Mr Majithia said the appointments were also apparently illegal and against constitutional norms. “Legislators can’t hold office of profit which these appointments are”, he added.

The Akali leader said people in the State were passing through hell because of the inhuman attitude of the Congress government. He said as many as 25 lakh students of government schools in the State were being denied mid day meals because the government had not released funds for the same.

“Even as the Congress government is holding functions in five star hotels to celebrate Poshan Maah it is not providing food to five lakh poor children attending anganwadis”. He said enrollment of scheduled caste students in colleges had come down from three lakh to two lakh due to stoppage of the SC scholarship. “Even girl students are being denied free bicycles under the Mai Bhago scheme”, he added.

Speaking about social welfare schemes, Mr Majithia said the Ashirwad scheme was not being implemented in the State denying funds to under privileged brides. He said similarly social welfare benefits were denied to ‘aata daal’ beneficiaries and old age pension beneficiaries in the name of audits.

The Akali leader said the government did not even spare the ‘anndaata’ by not releasing funds for three year old crop damage cases. He said similarly sugar cane dues of a Rs 700 crorre were being denied to farmers even as they continued to be denied complete loan waiver and even compensation and job in case of suicide victims. Mr Majithia said the Congress government had also stabbed the youth in the back by refusing to implement the ‘ghar ghar naukari’ scheme or give unemployed youth Rs 2,500 per month unemployment allowance and cell phones.

Stating that every section of society had been defrauded, Mr Majithia said the industry was promised power at a landing cost of Rs five per unit but was receiving power at Rs 8 per unit. “The common man has also been saddled with a 25 per cent increase in power tariff in the last two and a half years and even dalits have been saddled with huge bills with the partial free power facility extended to them by S Parkash Singh Badal being made redundant”.

The Akali leader said government employees had been hit hard with the government refusing to release Dearness Allowance and also not implementing the new pay commission. He said as many as 27,000 contractual employees were languishing and not being regularized. “New recruitments are not taking place and things have come to such a head that retired Patwaris are being hired afresh”.

He said the less said about governance the better. “PCS officers went on strike today stating they were subject to violence and even being kept in illegal confinement by various organizations protesting against the government”.

Mr Majithia also came down heavily on the Congress government for not releasing State funds immediately to provide relief and succor to thousands of Punjabis whose crops were destroyed following heavy rain and breaches. He said even now the Congress cabinet had trooped to Sultanpur Lodhi to indulge in photo ops despite the fact that it had not released even one rupee for hosting celebrations for the 550th Parkash Purb of Sri Guru Nanak Dev ji, he added.