Home Punjab Amend CAA to include Muslims too, will oppose NRC if introduced: SAD 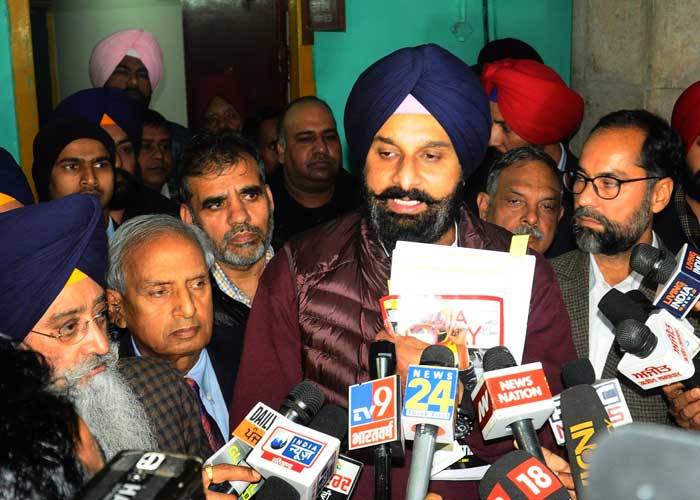 The ShiromaniAkali Dal today categorically demanded the application the Citizenship Amendment Act 2019 to members of the Muslim community so that they also get the same benefits as provided to the Hindu, Sikh, Buddhist, Jain, Christian and Parsi communities under the CAA.

“The party wants the Congress not to oppose the relief given to thousands of Sikh community, as from Afghanistan, but to focus only on securing relief to the Muslims also,” said the SAD Legislature Party Leader Sharanjit Singh Dhillon.

Elaborating difference between the stand taken by theSAD and the Congress respectively on CAA on the floor of the House and later in an interaction with the media, senior Akali leader Bikram Singh Majithia said “ There are three bottles of blood and three critical patients in a clinic, each patient needing a bottle.

The SAD wants that at least three patients may be saved by giving a bottle each to them, and efforts should meanwhile be made to secure the fourth bottle.But the Congress wants that if the fourth bottle is not found, no one should be given blood and all four patients should be allowed to die. They don’t want to save Muslims; they want to let the Sikhs suffer too.” This is pathetic and ridiculous.”

In a significant announcement, the SAD also came out strongly against NRC. “We strongly oppose any move like the NRC that forces needless hardships on the common people, said Mr Majithia. The party, however, welcomed the statement of the PM Shri NarendraModi in which he had clarified that the Govt was not contemplating the introduction of the NRC in the country.

On the inclusion of the Muslims in he CAA, the party wanted the House to pass a resolution recommending to government of India that CAA should be suitably amended to facilitate this relief to the Muslims , in addition to other communities, including he Sikhs, the Hindus, the Jains, the Budhhists, the Christians and Parsis.

The SAD also wanted the House to welcome and appreciate the relief given to the Sikhs and other communities through the CAA.

The SAD’s proposals to this effect were contained in two amendments which the party wanted to be incorporated in an official Resolution on the subject in the Punjab VidhanSabha today.He amendments were moved by Mr Sharanjit Singh Dhillon, SADLP leader.

These proposalswere a reiteration of the stand taken by the party president Sardar Sukhbir Singh Badal during the debate on the CAA in the Parliament, to an official resolution in the Punjab Vidhan Sabha on the CAA

“While we want Muslims also to get the benefit of the CAA, the Congress is trying desperately to stop its benefits from reaching even the Sikhs and others those who are going to get it,” said the senior SAD leader S Bikram Singh Majithia .

“The Congress leaders will have to explain to the Sikh masses why they are deliberately trying to block the relief under this Act to the Sikh community, notably the Sikhs who had to flee Afghanistan to seek shelter in India. These Sikh have been living in misery as second class citizens as their status in the country lacked ‘legal sanction as citizens,” said Mr Majithia’

Welcoming the relief provided to the Sikhs, the Hindus, Jains , Buddhists , Christians and Parsis who who had been forced to flee from Pakistan, Bangla Desh and Afghanisan to India, the SAD said that even members of the Muslim community, especially from the Shia and the Ahmedia sects, have been facing religious persecution in these countries, and they need to be given the same humanitarian relief as given to other victims. .

The party also dismissed as “redundant and hollow ” political posturing the announcement by the Punjab CM Captain Amarinder Singh on the NPC. “The NPC has been in existence since 1955, further amended in 2013. Former Prime Minister Dr Manmohan Singh and former Home Minister P Chandambram had been on record saying that there was nothing wrong with the NPC. As such, Captain Singh’s statement on the issue is nothing but “empty rhetoric.”

Mr Majithia described as ‘murder of democracy’ the “gag tactics” used by the speaker to help the cornered Congres party. There is an Emergency like atmosphere in the House.
SAD dismissed the AAP as “Baby Congress” saying that its presence in the House was meant only to provide lung-support to the anti-Punjab and anti people Congress party, said Mr Majithia.