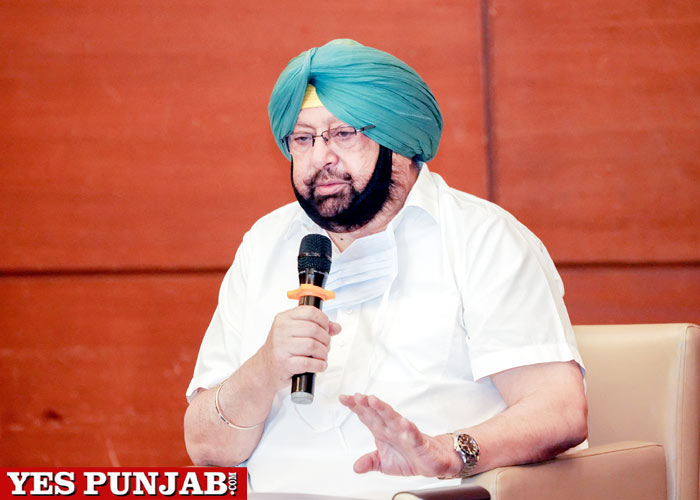 Chandigarh, October 21, 2020 (Yes Punjab News)
Punjab Chief Minister Captain Amarinder Singh on Wednesday cornered the Shiromani Akali Dal (SAD) and the Aam Aadmi Party (AAP) over their brazen double standards with regard to the three Amendment Bills, which they had criticised publicly hours after supporting them in the Vidhan Sabha.

The Chief Minister said he was amazed that they spoke in favour of the Bills in the Assembly, and even went with him to meet the Governor, but said different things outside. Talking to mediapersons after the House was adjourned sine die, he pointed out that the farmers had not said anything against the Bills, which were designed to safeguard their interests and those of the state’s agriculture.

It was more than clear that these parties were not interested in securing the future of the farmers or protecting the state’s agriculture and economy, the Chief Minister said, slamming SAD and AAP for playing to the galleries by pretending to back the Bills in the Assembly yesterday. Their lack of sincerity towards the farmers’ cause had been totally exposed by their statements thereafter, he said.

“If they thought we (I and my government) were fooling the people of Punjab, why did they not say so in the House? Why did they support and vote for our Bills?” asked Captain Amarinder, reacting to SAD leader Bikram Singh Majithia and AAP leadership’s statements. They had both accused the Chief Minister of misleading the people, citing his remarks on the possibility of the Governor/President not signing the Bills.

“If I had to fool the people why would I honestly share with them my apprehensions? Why would I openly talk about the possible scenarios instead of feeding them with a whole bunch of lies, as the Akalis and AAP are used to doing?” Captain Amarinder asked.

Both the Opposition parties had shown their true colours by trying to undermine the state government’s pro-farmer initiatives, which they had ostensibly backed in the House, said the Chief Minister, referring to the media/social media comments of Akali and AAP leaders.

He pointed out that these Opposition leaders had criticised his government’s efforts to save the farmers soon after joining his government in passing a Resolution rejecting the central farm laws along with Bills to negate the same, and even going to Governor with him to submit copies to him. “Clearly they have no shame left,” he added.

Captain Amarinder said, in response to a question, that other parties, especially AAP which had a government in Delhi, should also bring in legislations similar to those of Punjab to negate the dangerous effects of the central farm laws. Arvind Kejriwal should follow Punjab’s example, he said.

The Chief Minister reiterated that he does not care if the Centre dismisses his government but he would fight to protect the rights of the farmers till his last breath. “If Centre things I have done something wrong they can dismiss me, I am not afraid…I have resigned twice earlier and can do it again,” he said in response to a question.

There are plenty of legal options, the Chief Minister remarked while replying to a question, but expressed the optimism that the Governor will fulfill his responsibility by listening to Punjab’s people. The voice of Punjab had reached the Governor and he will send the Bills to the President of India, said Captain Amarinder, adding that the latter could not ignore the sentiments and appeal of the state.

Earlier, in the House today, the chief minister waved copies of newspapers quoting Majithia on the issue, and quipped “these people say one thing in Assembly and another outside.” With this kind of behaviour, people will start doubting the integrity of politicians, he warned.

Meanwhile, in his media interaction, Captain Amarinder said, while responding to a question, that he was happy that Navjot Singh Sidhu came to the House yesterday and spoke well.