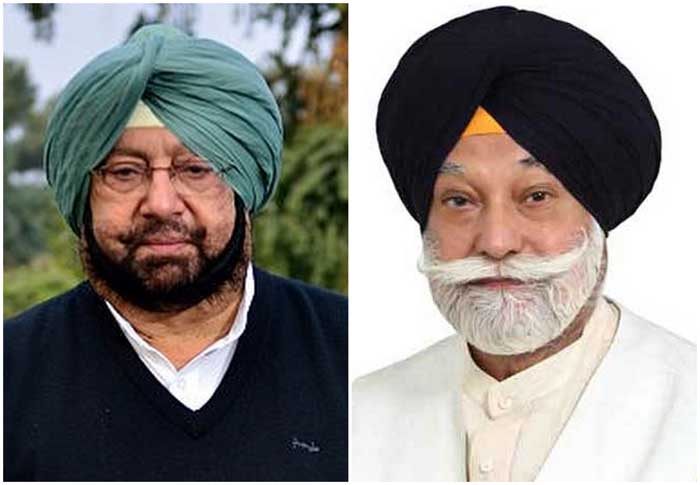 Chandigarh, November 5, 2019:
At a time when every Guru Nanak Naamleva is anxiously and eagerly waiting for the day he can trudge through the Sri Kartarpur Sahib Corridor and pay obeisance to the great Guru, it is appalling that Punjab Chief Minister Capt. Amarinder Singh is blatantly disparaging the spiritual relevance of this historic corridor and casting despicable aspersions on the underlying basic leitmotif of this miracle of history in South Asia.

Caring two hoots for the wounds he is inflicting on the hearts of not just the Sikh community but at the core philosophy of Sikhism, Captain Amarinder Singh is acting as an agent provocateur, parroting the line the RSS, about the corridor coming up not because of the decades-long struggle by the Sikhs or even the political sagacity of the leadership of the two countries, but because of the machinations of the ISI.

Captain Amarinder Singh has now started issuing daily statements on how it is the ISI that is behind the corridor and how the prime purpose that the holy place of the Guru will now serve will be to facilitate training to terrorists.

Pertinent to mention here that Captain Amarinder Singh is acting as a front man of Mr. Ajit Doval, the all-powerful National Security Advisor to the Government of India, and is casting a contemptible shadow on the entire venture as we all wait for the sublime opening of the Kartarpur Sahib Corridor.

That the CM’s statements are not loose talk or off the cuff remarks is clear from the fact that he has been repeating these on national television with disturbing regularity. When such objectionable statements comes just days before the ceremonial opening of the Corridor seems to be aimed at either aborting the entire venture or ensuring it does not survive for too long.

Rather than being beholden and obligated to Mr. Imran Khan, the Pakistan Prime Minister, as a Sikh and on behalf of the Sikhs and Punjabis and Guru’s Naamleva the world over for boldly conceding the long cherished demand of the Sikh community for allowing and facilitating a corridor of love, peace, religiosity and spirituality to pay obeisance at Darbar Sahib (Kartarpur), Captain Amarinder Singh, on the contrary, is calling it a part of the game plan of the despicable ISI (Inter Service Intelligence) of Pakistan.

By doing so, Capt. Amarinder Singh is not only debasing the spiritual aspiration of the entire Sikh community but is also very foolishly putting the dignity and integrity of the Sikh community in the realm of suspicion, little realizing that these fundamentally cherished aspirations have been the integral part of the ‘Ardaas’ (Sikh prayers) of Sikh Sangat for 72 years.

Most intriguingly, he does not see any mischievous plan and does not cry foul on the issue of the humiliating and undignified ‘Honey Trap’ that is often hanging around his neck or around whose shoulders his arms are often dangling. That is the honey trap which is the work of the ISI. This honey trap has been in the works for several years and the NSA of the Government of India Mr. Ajit Doval does not seem to have any objection to the illegitimate stay of this female journalist of Pakistan, who has enormous proximity to top Pakistani Army Generals.

She arrived as a guest a few years back and is now a permanent resident at the official residence of the Chief Minister of the sensitive border State. I wonder why and how the Government of India has been allowing this sinister arrangement to continue for so long? Can Mr. Ajit Doval, National Security Advisor, Government of India answer this pertinent question ?

Why should one not believe that this is the perfect arrangement that suits Mr Doval’s agenda, using Capt. Amarinder Singh’s weak nerves to discredit the spiritual ethos and aspirations of the Sikh community?

It is also to be noted that Amarinder Singh is also facing serious cases of corruption in the court of law and his family’s questionable fiscal deals with foreign banks and the financial irregularities are being probed by the Directorate of Revenue Intelligence, Govt. of India.

So, in order to get some kind of reprieve, he is hell bent to prove his faithful credentials to impress Mr. Ajit Doval, even at the cost of casting despicable aspersions on the intent of the Pakistan Government, which reverentially bowed before the Sikh community’s prayers of more than seven decades and allowed the corridor to improve its relations with Punjabis all over the world.

If Capt. Amarinder Singh feels so strongly and is vary of the intent of the Pakistan Government to initiating the process for opening the Kartarpur Sahib Corridor for Sikh pilgrims, then why is he leading the first batch of pilgrims to pay obeisance at Darbar Sahib, Kartarpur (Pakistan) by using the same corridor of faith about which he is casting shadows of incredulity and deceit?

Mr. Amarinder Singh, please maintain some sense of sublime honour and dignity, howsoever strange to your persona these constructs are, and don’t be so absurd and uncultured, as this kind of inanity and such innuendos, certainly do not behove the Chief Minister of Punjab.