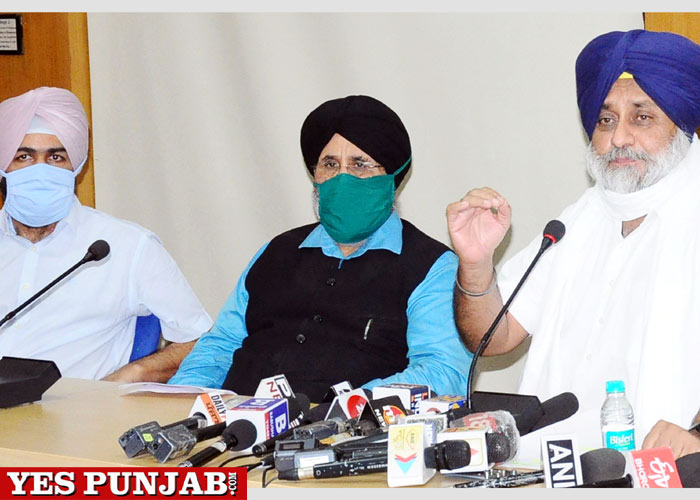 Shiromani Akali Dal president Sardar Sukhbir Singh Badal said today that his party will never compromise on the issue of Minimum Support Price and Assured Marketing for farmers’ produce, especially for paddy and wheat. He said that his party has already ensured that the present assured marketing and MSP regime for farmers produce will continue

Mr Badal said that the Punjab Chief Minister Captain Amarinder Singh today “lied in broad daylight on the issue of the APMC. He has in fact already given his assent to the main provisions of the Act on August14, 2017.”

The former Deputy CM said,” Let there be no confusion on this. SAD will never tolerate any deviation from the principle of assured marketing and Minimum Support Price. We have already ensured that there are no compromises on these issues in the Act.”

“ Federalism and interests of the Panth, Punjab and the farmers form the four pillars on which the edifice of the Shiromani Akali Dal stands and there will never be any compromise on any one of these. No sacrifice is too high for us for protecting these pillars through peaceful democratic ways. Nothing is dearer to us than our principles on these issues,” said Mr Badal

He was addressing media persons at the party headquarters here this afternoon adding that farmers form the backbone of Punjab and of the Shiromani Akali Dal.

Mr. Badal added that the party has already ensured that the new APMC Act provides adequate, inbuilt and foolproof guarantees for the continuation of the MSP and assured marketing regime on a long term basis .

“We have ensured that this regime will continue in its present form, in addition to opening up new possibilities and creating new platform to increase competition for the farmers produce. Nothing that compromises the interests of the farmers on the present MSP and Assured Marketing regime would have been nor will be acceptable to our party,” said the SAD chief.

The former Deputy Chief Minister lashed out against “the anti-farmer, anti-Punjab and anti-Panth Congress party for deliberately trying to create confusion on the issue of farmers interests. “Captain Amarinder Singh’s only contribution to Punjab, Panth and the farmers has been “his betrayal of all three by breaking the sacred promises made to them on oath of the sacred scriptures.

The only thing he will be remembered for after 2022 is the withdrawal of the free power facility to farmers during his last tenure as Chief Minister,” said Mr Badal.

“The SAD has always stood like a rock by the farmers and has always remained in the forefront of the battles for justice for the people of Punjab. This tradition of the party will be carried forward with even greater zeal and commitment on every issue, including on safeguarding the interests of the peasantry,” said Mr Badal..

Mr Badal said that he was committed to preserving the glorious heritage of his party as a champion of the interests of Punjab, Punjabis , Panth and the farmers. “ Our workers and leaders have spent lifetimes fighting against the Congress repression and injustice against Punjabis in general and the Sikhs and peasants in particular.

We will continue to follow the principled policy of “zero tolerance” of any step, decision or policy which hurts the interests of the Punjabis, the Sikhs and the farmers,” said Mr Badal.