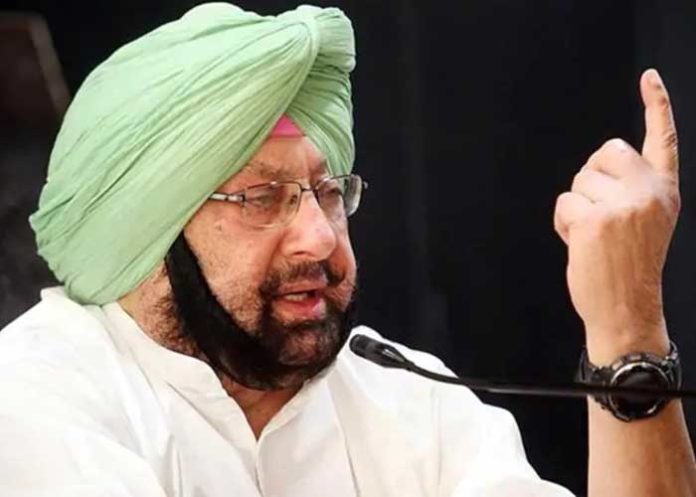 Amid the spiralling Covid cases, the Punjab Government is all set to impose some more stringent curbs in the state, including further restrictions on social, public and family gatherings, as well as mandatory wearing of masks even while working.

Announcing this during his #AskCaptain Facebook live session today, Chief Minister Captain Amarinder Singh said strictness was necessary to check the spread of the Coronavirus as he did not want Punjab to go the way of Mumbai, Delhi or Tamil Nadu. Asked why the state government was not going for weekend lockdowns to contain the spread, he said Sunday lockdowns were already in place and the government was keeping a close watch on the situation and will do whatever necessary.

Underlining the need for everyone to behave responsibly in the current crisis, Captain Amarinder exhorted the people to adhere to all curbs, even as appealed to all political parties to avoid any kind of gathering to save the lives of Punjabis. “It is our joint responsibility to save Punjab. Politics can wait,” he stressed, calling for a collective fight by one and all against “the biggest danger facing humanity.”

Expressing concern over the rising number of Covid cases, with several frontline workers and even government officials testing positive, the Chief Minister said with vaccine still not in sight, it was left to the people to fight the Coronavirus. Pointing out that 5100 people were challaned on Saturday for not wearing masks, with some cases of spitting in public also reported, he said these actions could not be allowed. He further said his government would be distributing more reusable and washable masks to the poor.

Noting the importance of medical history in fatalities, the Chief Minister said all Corona deaths in the state were being audited to enable doctors and experts to strategise in a more focused manner to fight the Covid.

In response to a question, Captain Amarinder attributed the increase in Covid cases in Punjab to increased testing and the large number of people coming from outside. From 700 tests a day initially, testing had gone up to more than 10000 a day, he said, adding that in just four days, as many as 63000 people had entered from other states, including Delhi.

To a question on why Punjab was not making Covid negative certificates compulsory for those coming from hotspots like Delhi, as had been done by Himachal Pradesh, the Chief Minister said he could not comment on the decision of the neighbouring state but his government was taking its own steps to prevent influx of potential Covid suspects.

The Chief Minister called upon the people to get themselves checked at the slightest symptom or doubt and not take any chances, as early detection of Covid was essential to preventing deaths. He further said disinfectants were being sprayed around the state to check the spread of other monsoon related viruses.

To a request from Medical Lab Technician Association Punjab that their role should be recognised as frontline warriors in Covid management as they were exposed to high risk, with many having got infected in the process, the Chief Minister said the technicians were very much frontline workers and their role in the current crisis would never be forgotten.

Captain Amarinder assured a Sangrur resident that he would ensure that the faulty CT scan machine in the district government hospital is checked and the problem is rectified.

The Chief Minister told a UK-based Punjabi wanting to come to Punjab to see his mother that the rule on seven-day institutional quarantine, followed by 7 days of home quarantine, was mandatory and could not be relaxed in the interest of his safety and that of others. Rules have been made for the safety of all, he stressed.

To a question on slow pace of mutations, he said he had directed the Chief Secretary to conduct a special drive to accelerate the process and clear pending mutations at the earliest.

Responding to NDA instructor N/Sub Harbans Singh’s grandson’s submission that the former remembers him fondly and wants to meet him, the Chief Minister said “if he can travel please bring him here.” “One can’t forget old friends and brothers in uniform can never be forgotten,” he said, adding that once you wear the uniform, you become friends for live. Captain Amarinder said he will look forward to meeting his former NDA instructor.

Asked about regularisation of contractual employees, Captain Amarinder said the cabinet sub-committee set up to look into the matter would submit its report and a decision would be taken by his government soon.

To a concern expressed by a Amritsar resident on the need for Shri Darbar Sahib to buy desi ghee from a private Pune-based company instead of Milkfed, the Chief Minister said he was not in favour of this as Dairy was the second crop for Punjab and had to be supported. Commenting that no ghee is better than Punjab ghee, he hoped SGPC would reconsider its decision.

In response to a request from a Fazilka Kinnow farmer to ensure proper marketing of his crop in view of the Covid crisis is projected to peak in the next 3-4 months, Captain Amarinder said while a robust marketing structure is already in place, he will ask the Agriculture Department to look into the matter and ensure there are no loopholes.

On a point raised by a Khanna resident regarding PSEB board certificate not recognised for international studies in some countries like Australia, Captain Amarinder said he will take up the issue with the Australian Government and urge them to give due recognition to PSEB school degree for facilitating higher education degree from their country.

To a question on the status of the project for lift irrigation and drinking water worth Rs. 65 crore in Changar area in Kiratpur Sahib in the Kandi belt, the Chief Minister said seven schemes had been envisaged, of which three were already operational and work was in progress for two, while the remaining two were not found feasible.