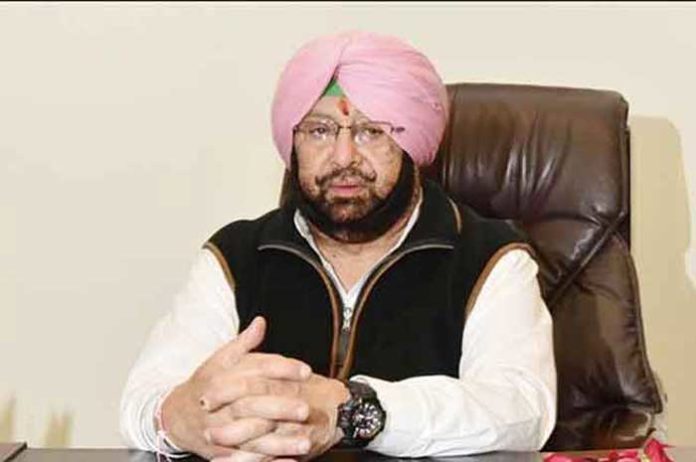 Accusing the Akalis of selling Punjab’s interests by agreeing to the anti-farm Ordinances in order to ruin the state’s farming community, Chief Minister Captain Amarinder Singh on Saturday asserted that he would take the fight against the anti-farmer Ordinances to the Centre.

Captain Amarinder said he would be writing soon to the Prime Minister for appointment for the all-party delegation which all Punjab parties, except the BJP, had unanimously decided upon.

“No matter what Sukhbir Badal or BJP say, once these Ordinances are passed, the Centre’s next step would be to end the MSP regime and dismantle the FCI,” warned Captain Amarinder, pointing to the recommendations of the Shanta Kumar committee. “You can imagine what will happen to Punjab farmers if this becomes a reality,” he said, adding that the procurement process will come to an end and Mandis will be finished once the Ordinances become law.

The Akalis were only interested in protecting their political interests, with Harsimrat Kaur Badal focused on safeguarding her position in the Union Cabinet, said the Chief Minister, adding that the Badals were appeasing the Bharatiya Janata Party (BJP) to save their alliance in Punjab at any cost.

“They are just bothered about their political interests. Sukhbir wants his wife to stay in the Union Cabinet while he remains the Pradhan here. They are thinking about themselves and not of Punjab,” he stated, adding that history is witness to the fact.

Underlining the need to save Punjab and protect its interests, the Chief Minister said the Ordinances were 100% against Punjab and anti-farmers, as agreed by all political parties, except BJP and the Akalis. All the Kisan Unions, who he had recently met, also wanted immediate scrapping of these Ordinances, he added.

Responding to questions during today’s Facebook Live edition of #AskCaptain, the Chief Minister said the Akalis had earlier ruined the state with their Punjabi Suba movement and were now hell-bent on destroying the farming sector by supporting these Ordinances, which were a blatant attack on the country’s federal structure. History is witness to the fact that the Akalis divided Punjab and gave away bulk of the state’s resources to Himachal Pradesh and Haryana due to their sheer short-sighted focus on their petty political interests.

Had the state not been divided its representation in Parliament would have been many times over and its writ would have worked in Delhi, with no question of its interests being ignored, said Captain Amarinder, lamenting that with just 13 MPs, Punjab’s voice was going unheard, especially since other states were also now producing wheat and the central government felt it no longer needed Punjab to sustain its food security. “They (governments at the Centre) squeezed us and have now discarded us,” he said, urging the people of Punjab to extend their full support to the fight against the Ordinances and not be misled by the Akalis and BJP.

The Chief Minister welcomed the permission given by the Centre to his request for using helicopters to spray insecticides on crops to prevent locust attack. While expressing the hope that the locust swarms would spare Punjab, he said a MI17 had been earmarked for spraying chemicals and the operation would start from Rajasthan soon.

On the Covid situation, the Chief Minister said things were not good, as cases continued to rise across India, and even Punjab had touched the 6000 mark, with 157 deaths reported so far. He reiterated the importance of taking all precautions, including social distancing and wearing of masks. Pointing out that 4000-5000 cases were being registered every day for violations, including spitting on roads, he urged the people not to get complacent and violate the rules for their own protection and to save Punjab.

“We can only control, not cure,” said the Chief Minister, exhorting the people to follow all guidelines being shared by Sarpanches and others as part of Mission Fateh. He made it clear in reply to a question that recruitment of doctors, paramedics and nurses was in progress on fast track with the Cabinet having taken a special decision to strengthen the fight against Covid.

To a question on opening of coaching centres, he said the decision rested with the Centre but the state government will write to them for permission since the situation in Punjab was better than many other states.

A student wanted to know about travelling to Canada where he had an exam scheduled for September. The Chief Minister said while he expected international travel to be open before that the state government would also try to get his name on the list sooner if flights resumed.

On a Ferozepur resident’s concern on the border situation with China and Pakistan, Captain Amarinder said the Indian Army was capable of meeting any threat, individually or collectively from these two countries. “By the grace of God, India and Punjab will remain safe and progress,” he added.

Captain Amarinder assured a questioner that there would be no shortage of funds for ensuring befitting 400th birth anniversary celebrations of Sri Guru Teg Bahadur ji.

Asked about power tripping at biomass bricks unit in Patiala and the bad condition of roads, the Chief Minister said he would ask the concerned departments to look into the matter and address the problems.

On a question regarding delay in opening of Kharar flyover, Captain Amarinder said it was a NHAI project and got delayed due to Covid but work had resumed now and his government was also following up with the GoI. He recalled that the Kharar bypass was constructed during his last tenure.

To another question regarding the High Court decision on payment of school fee in the absence of classes, the Chief Minister said he was also not happy with the same and the state government was in the process of filing a review petition in the High Court.

The Chief Minister assured Manpreet Kaur from Fazilka, an accident victim who had been promised a job by the previous government, that though he could not comment on what the SAD-BJP did but “we will fulfill the Government’s commitment.”

In response to a complaint about haphazard development in Ludhiana, Captain Amarinder said the development was taking place as per the Master Plan but if there was any specific issue, the same would be resolved.

On strengthening of ambulance fleet in the state, he said the target of 400 would be achieved this year. To another question, he said 750 stadiums will be built in Punjab, with five in each block, to promote sports.