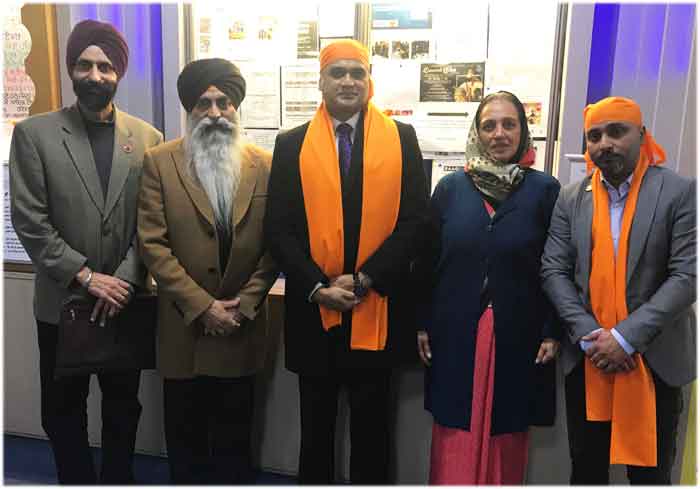 Anil Mathen said false rumours were being spread about stopping of Stansted Amritsar direct flight which was started on 550th Birth Anniversary of Guru Nanak Dev Ji. This flight will be continued by Air India.

He said that success of any flight depends on the number of passengers and to sustain this route maximum number of travellers need to use the flight. He thanked SEVA Trust UK, Amritsar Vikas Manch, Gurdwaras and all organisations for their support.

He said that Air India is the first and only airline in the world to honour Guru Nanak’s message of Ek Onkar Kar (God is One) written on the tails of planes. Air India respects the Sikh and all diverse communities and is committed to provide the best service to all.

Air India agreed to share the details about community feedback with the senior management and also consider travel data of passengers from Punjab.

Addressing the large congregation at the Gurdwara, Gurmeel Singh Malhi thanked Air India for their cooperation. He also thanked SEVA Trust UK, Amritsar Vikas Manch and all other organisations for their selfless efforts.

Cllr Sekhon thanked Air India for accepting the invite by SEVA Trust UK for the meeting. He said ‘Strong initiatives and support by Air India, Indian Govt, Mr Harpeep Singh Puri and the India High Commission, London made this direct flight possible and on behalf of local communities, we would like to thank the Govt. for fulfilling this long pending demand and giving this gift on the 550th Birth Anniversary of Guru Nanak Dev Ji.”

He also thanked Singh Sabha Committee and other all the Gurdwaras for supporting the joint efforts by the SEVA Trust UK and the Amritsar Vikas Manch for direct flights to Amritsar. He said that Anil Mathen and his entire Air India team have played a significant role in the provision of new flights.

Air India representatives were honoured with a ‘Siropa’ for their support for direct flights from London to Amritsar. Air India Manager Tina Singh was also present on the occasion.