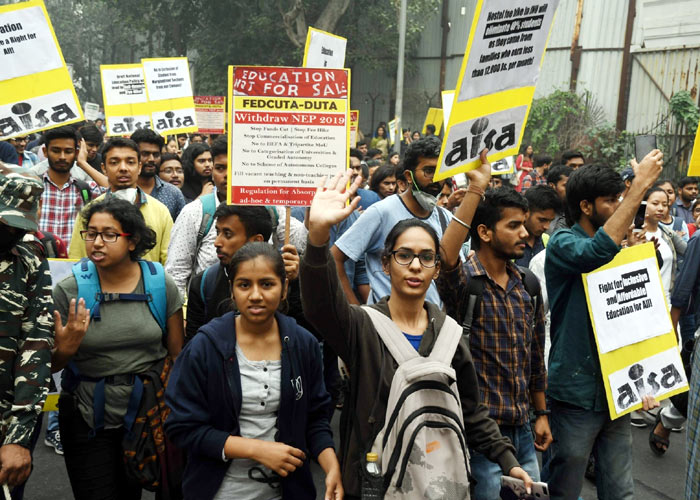 After being detained for several hours, leaders of the Jawaharlal Nehru University Students Union, along with other protesters, were released by the Delhi Police on Monday evening after their march to Parliament was stopped.

The released leaders are now currently attending a meeting with the Joint Secretary of the Human Resource Development Ministry after a day-long protest on the streets over the proposed hostel fee hike.

The JNUSU confirmed that the agitating students are returning back to the campus after blocking the roads of south and central Delhi for almost an entire day.

“The protest has not been called off, but as we had promised, we are returning back to campus after the police released detained students,” JNUSU Vice President, Saket Moon said.

“The future of the protest will be decided after the meeting with Joint Secretary,” he added.

At least 50 students were detained by the Delhi Police, after the agitating students tried marching to the Parliament on Monday as its Winter session began.

In a poster shared by the JNUSU, two days before the protest, the students’ body had appealed to students from all universities to attend the march as they claimed the march was a “way to appeal to lawmakers to fight on our behalf inside the floor of the house”.

In response, authorities imposed prohibitory orders both outside the parliament building and around the JNU campus, and set up barricades near Safdarjung Tomb in south Delhi – where the students had gathered – to stop them from advancing any further.

Earlier on Monday, the Delhi Metro closed entry and exit gates at the Udyog Bhawan, Patel Chowk, Lok Kalyan and Central Secretariat stations after hundreds of JNU students clashed with cops after taking to the streets to demand a full rollback of the hostel fee hike.

“The Delhi Police staff acted with restraint all along and, despite continued defiance by some groups of students, methods of persuasion were resorted to, and there was no use of water cannons, tear gas shells or lathi-charge at any stage of the protest. Women staff had been deployed in adequate numbers to deal with female protestors,” Delhi Police said in a statement.

Earlier, with posters in hand and chanting anti-fee hike slogans, hundreds of JNU students marched on, defying imposition of Section 144 that prevents gathering of more than four persons in one place, for their protest march to parliament.

JNU students climbed over the barricades, set up by the police, leading to scuffles with the police.

The protest was held even as the Education Secretary addressed their concern by a partial roll back and on Monday, announced a new committee to open dialogue with the students.  (Agency)