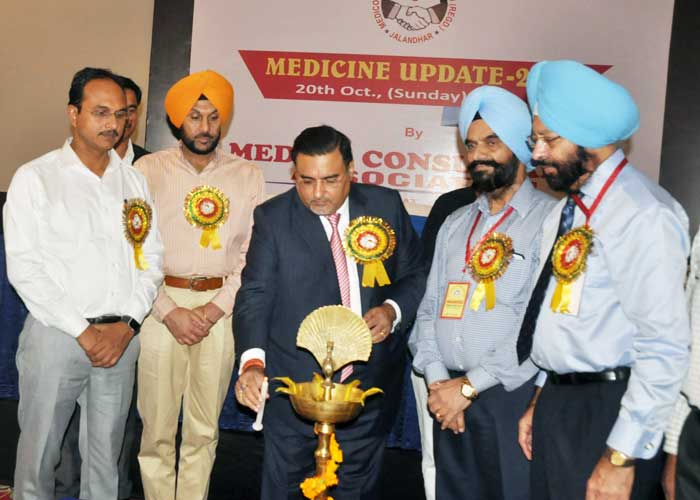 Addressing the gathering after inaugurating Medicine Update 2019 organized here by the Medico Consultant Association today, the Advocate General, Deputy Commissioner and Commissioner of Police lauded the philanthropic service rendered by the Doctors from time to time.

They said that the doctors were serving the masses in real sense with their commitment and dedication. Similarly, they said that this service should be further taken to a new height by serving the needy and underprivileged sections of society in far better manner.

The Advocate General, Deputy Commissioner and Commissioner of Police said that the commitment of the Doctors in serving the mankind was unmatched and unparalleled due to which the Doctors were given a lot of respect by every strata of the society.

Lauding the efforts of the society in holding this, they said that it was a highly commendable initiative which would go a long way in keeping the medical fraternity abreast with the latest advancements and emerging technologies in the field of medical education, research and health care.

They hoped deliberations during the conference would help the doctors to serve the ailing mankind far more efficaciously with the latest diagnostic and health care facilities.

They assured the medical fraternity that the state government and district administration was committed to safeguard the interests of the Doctors in case of any violence in their premises.

They said that any sort of violence that obstructs the discharge of duty by the Doctors in a free and fair manner would not be tolerated and would be dealt with strictly. They assured fulsome support and cooperation to the Doctors for smooth and hassle free discharge of their duties.

Earlier, the President of Association Dr GS Gill welcomed the dignitaries in the function and apprised them about the initiatives taken by the association to serve the people and update the expertise of Doctors from time to time.

On the occasion he urged the Deputy Commissioner and Commissioner of Police to issue a helpline number to the Doctors so that if anyone of them face any problem then they could immediately contact the administration, which was readily accepted by both the officers.