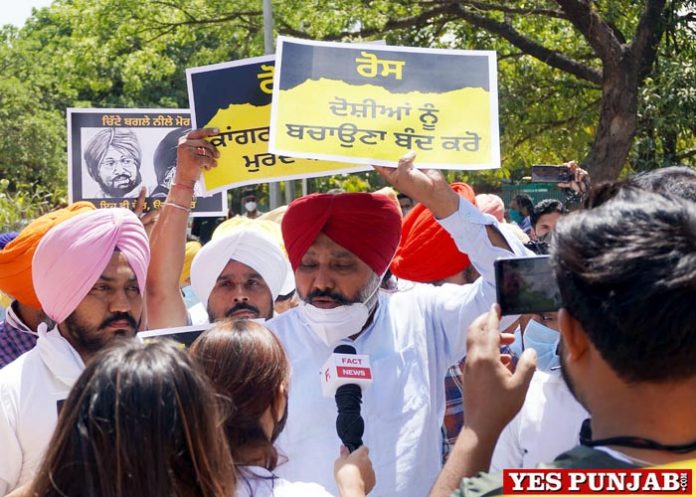 Chandigarh, April 19, 2021 (Yes Punjab News)
Raising voice against the collusion of Captain Amarinder Singh and the Badals, the Aam Aadmi Party (AAP) MLAs on Monday staged a protest over the delayed action against the accused and justice to the families of the victims in Behbal Kalan desecration and Kotkapura firing case, and marched to gherao CM Captain Amarinder Singh’s residence.

Senior leader of the AAP and Leader of Opposition (LoP) in the Punjab Assembly, Harpal Singh Cheema along with MLAs Sarvjeet Kaur Manuke, Kultar Singh Sandhwan, Gurmeet Singh Meet Hayer, Amarjeet Singh Sandoa, Jai Kishan Singh Rodi, Kulwant Singh Pandori, Manjit Singh Bilaspur, Jagtar Singh Jagga Hissowal along with other party leaders protested against the Punjab government and raised slogans against Captain and the Badals for their ploys in regard with the cases.

On the way to gherao the CM’s residence, the AAP MLAs were stopped by the police by placing barricades. The legislators including LoP Harpal Singh Cheema and other senior leaders were later detained by the police.

He said that instead of putting up the case in a better way, Captain Amarinder Singh had let the case and the SIT probe reports go down. Cheema said that as the Badals had taken back the cases against Captain Amarinder; now Captain was paying that debt with interest.

AAP MLAs Sarvjeet Kaur Manuke and Kultar Singh Sandhwan said that Captain Amarinder Singh had failed in putting up the case in proper manner. They said that when Captain Amarinder came to power, he had stated that he would give justice to the victims of the incident, but after so many years, still justice has not been served.

“Badals are being exposed through the SIT probe reports, their misdeeds have come to light,” they added. They said that if the SIT had done its full investigation with probe reports, then why justice is not being provided by the Captain government in the case.

MLA and Youth wing president Gurmeet Singh Meet Hayer said that every child of Punjab knows who was behind the sacrilege case. “Then, why does the Captain government want to save the Badals?,” he added.

He further said that why the government did not appealed to the High Court double bench instead of the Supreme Court. Hayer said that Captain’s intentions had been exposed with the quashing of the SIT’s probe reports and resignation moved by SIT head IG Kunwar Vijay Pratap Singh.

“The people of our country and those living abroad, whose sentiments are attached with Sri Guru Granth Sahib ji, will not forgive Captain Amarinder Singh and the accused behind the sacrilege incident. Captain will have to appear before the court of the people and face them,” he said.

The AAP MLAs further said the different turn of events in the case thus delaying the justice was due to Captain’s intention of saving the Badals. They said that IG Kunwar Vijay Pratap Singh’s recent letter on witness allurement has further exposed the SAD; thus raising questions on Captain Amarinder Singh.

The MLAs said that after formation of the AAP government, the cases would be re-investigated and justice would be served to the people of Punjab.