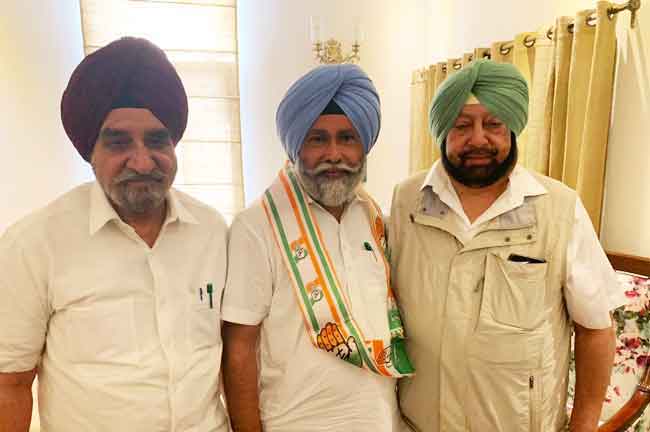 AAP rebel MLA Manshahia, who had sided with Sukhpal Singh Khaira against Kejriwal, but not joined his party, today quit AAP and joined Congress, dumping Khaira in the process.

Manshahia joined Congress in the presence of Capt Amarinder Singh and other senior leaders of the party including Punjab Cabinet Minister Tript Rajinder Singh Bajwa.

Manshahia who was elected on AAP ticket from Mansa had initially sided with Sukhpal Singh Khaira but shied away from joining his Punjab Ekta Party and the Punjab Democratic Alliance. He was till now reportedly supporting Khaira but today sprung a surprise by joining Congress. He had earlier also indicated that he can join Congress.

Welcoming him on board, the chief minister said like-minded people from other parties, who had the interest of the state at heart, were joining the Congress in Punjab in large numbers. It was a clear sign of complete disillusionment within AAP, which had lost its locus standi amid a party-wide rebellion.

The 56-year engineering graduate from Guru Nanak Dev Engineering College had won the 2017 Assembly elections from Mansa, polling about 40% votes, and Chief Minister Captain Amarinder Singh said his joining would further strengthen the Congress, which was riding a wave of strong public mood in its favour.

Manshahia, who had taken a premature retirement from Punjab Pollution Control Board in 2015 after serving as senior environmental engineer in the department, said he wanted to serve the people of Punjab, which he felt the Congress was best equipped to do. AAP had completely lost the narrative in Punjab, with no positively agenda or ideology to guide it, he added.