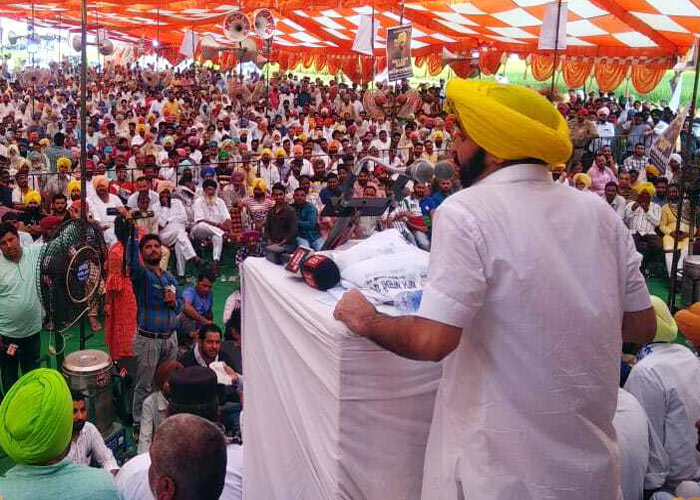 The Aam Aadmi Party (AAP) Punjab president and Parliamentarian Bhagwant Mann has said that the previous SAD-BJP and now the Captain Amarinder Singh government were responsible for the sorry state of affairs the state of Punjab shoved into.

Addressing a mammoth gathering at the annual Chhapar Mela here on Friday, Mann said that the unemployed youth holding professional and other degrees were subjected to stage protests for jobs, farmers and farm hands were committing suicides day in and day out, while the zombie of drugs was eating out the vitals of the state, saying that the Badals and Captain were launching their 3rd generation into politics, the 4th generation of farmers in the state was forced to commit suicides due to heavy debt on their heads.

Citing the latest example, Mann said that the 5th member of a family of Bhotna village under Barnala district under debt, had to commit suicide due to heavy debts, which he said was a tight slap on Captain Amarinder Singh government’s so-called loan waiver, saying it had reneged on the promise of bailing out the farmers.

Mann said that, like the erstwhile Government led by the Badals, Captain government too had failed to live up to its poll promise of ‘ghar-ghar naukri’ saying that both (Badals and Captain) were responsible for driving the youth to vicious dragnet of drugs, which had flourished under their protective patronage.

Taking a dig at the Captain Amarinder Singh on the issue of appointing party MLAs to the plum cabinet-rank post, the AAP MP said that their appointment was contrary to the tenets of the constitution besides being extra burden on the public exchequer, saying that what was the need for advisers for a chief minister who had no work to do.