Home Punjab AAP expands its structural base in Punjab; 460 block presidents appointed in... 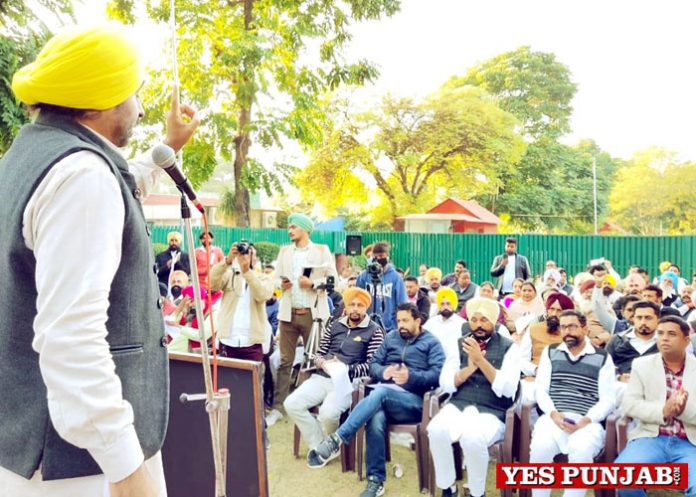 Chandigarh, November 21, 2020 (Yes Punjab News)
The Aam Aadmi Party (AAP) Punjab has expanded its organizational structure in the state by making appointments of new office-bearers here today. The party’s state president Bhagwant Mann and in-charge of Punjab affairs and MLA, Jarnail Singh, appointed 135 block presidents in 17 districts of Punjab, who took oath here today, taking the tally of appointments to a total of 460 Block Presidents appointed in 22 districts of Punjab.

Bhagwant Mann said that the party had taken a step forward towards perfecting the ground level infrastructure in the state. Speaking on the occasion Mann and Jarnail Singh said that the new appointments had been made after marathon consultations with the grass root level people and party workers and keeping in view their commitment and penchant for taking the party to another level of success.

They said that the Aam Aadmi Party would always be in the forefront for the cause of common people in Punjab, who had suffered immensely at the hands of the traditional parties ruling the state for a longer span of time.

The AAP MP said that the announcement of a new organization had sounded a clarion call for the 2022 Assembly elections, saying the Aam Aadmi Party, with the cooperation of the people, would oust the Congress from power in the state, adding that it would continue to work as a powerful organization even after the elections.

Mann said that with the new appointments, the grassroots party workers were gung ho. The new appointees took a solemn vow to work in tandem and with added vigour. He said the Akalis and Congress had took turns in ruining Punjab and that the people of Punjab would give the Aam Aadmi Party a chance to clean up the political mess and lay the foundation of a vibrant and prosperous Punjab.

Jarnail Singh on the occasion said that an organization is the backbone of any political party. With this in mind, all sections of society had been given equal representation, adding that it was now the responsibility of the newly appointed office-bearers to engage like-minded people with the ideology of the Aam Aadmi Party, bringing more people into its fold who were keen on building a strong organization so that it could succeed in ending the politics of hatred and make Punjab a prosperous and peaceful state yet again.