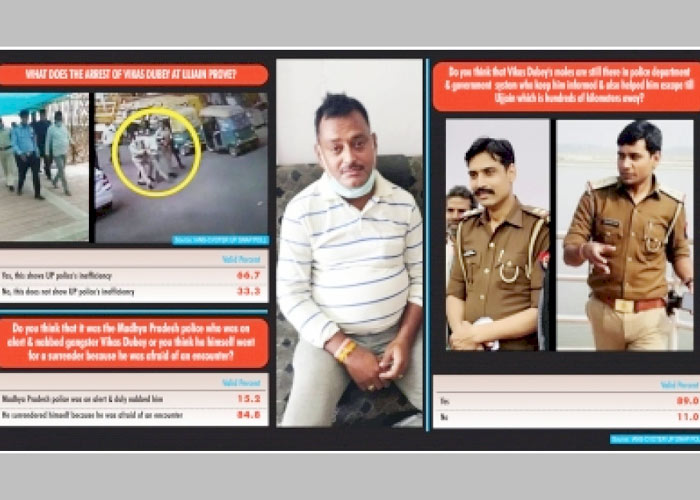 The arrest of fugitive Kanpur gangster Vikas Dubey hundreds of kilometres away in Madhya Pradesh’s Ujjain makes the maximum number of people believe that it was a surrender and also highlights the inefficiency of the Uttar Pradesh Police, as per IANS-CVoter Snap poll.

On a question in the survey as to what does the arrest of Dubey in Ujjain prove, almost two thirds or 66.7 per cent of the respondents of the poll said that this shows UP Police’s inefficiency.

The remaining 33 per cent said this does not show the inefficiency of the UP Police.

People also overwhelmingly are of the view that Dubey has moles in the police department who helped him to run and escape.

To a question on whether Dubey’s moles are still there in the police department & government system who keep him informed and also helped him escape till Ujjain which is hundreds of kilometres away, as many as 89 per cent answered yes while only 11 per cent said no.

According to the MP Police, VDubey reached the Mahakaal temple at Ujjain around8 a.m. and then informed the security men about his identity and asked them to inform the police.

Dubey has been on the run for almost a week, ever since the ambush and killing of eight police personnel in Kanpur. Police searched for him in Haryana, and Delhi, and kept a close watch on India-Nepal border.