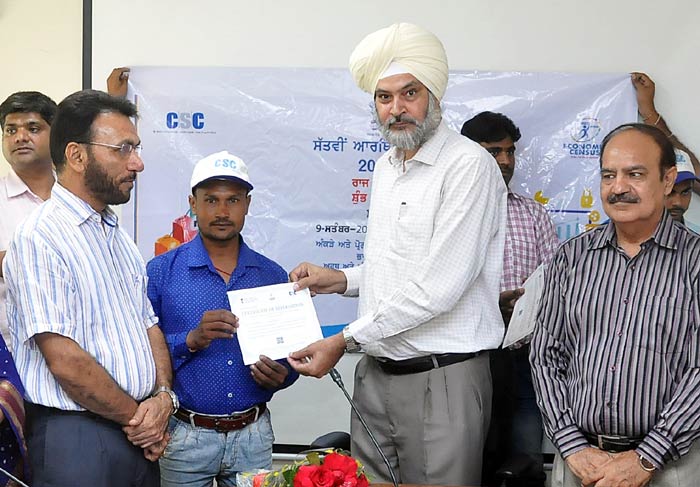 The second phase of 7th Economic Census has been started in the state on Monday here at Vit and Yojana Bhawa and the task would be completed in a time frame of three months.

Handing over the certificates to the Supervisors before sending them to field, Principal Secretary Planning Mr. Jaspal singh stated that the Economic Census will provide the complete count of all establishments within the geographical boundary of the state including those on the unorganized sectors, which have a huge contribution in state Economy in terms of employment generation. The information collected during the Economic Census will be useful for Socio-Economic developmental planning at state and district levels.

He also said that the Supervisors were trained on the key concepts and definitions, processes, digital platform and application to be used for the data capture and supervision in the field. He said that 1st Phase has been started in Tarn Taran, Fazilka, Ferozepur, Faridkot, Bathinda, Mansa, Moga, Ropar, Barnala, Fathgarh Sahib and Sri Muktsar Sahib districts on August 26, 2019. He further said 2nd Phase has started today in Amritsar, Gurdaspur, Hoshiarpur, Jalandhar, Kapurthala, Ludhiana, Saheed Bhagat Singh Nagar, Patiala, Sangrur, Mohali and Pathankot districts.

Mr. M.L. Sharma, Economic Adviser Punjab said that the census would cover all entrepreneurial units in the state which are involved in any economic activities of either agricultural or non-agricultural sector which are engaged in production, distribution of goods and services not for the sole purpose of own consumption.

The task would provide detailed information on operational and other characteristics such as number of establishments, number of persons employed, source of finance, type of ownership etc. and this information would be utilized for micro level planning and to assess contribution of various sectors of the economy in the gross domestic product (GDP), he added.

Notably, the 7th Economic Census -2019 is being conducted by Ministry of Statistics and Programme Implementation (MoSPI) to provide disaggregated information on various operational and structural aspects of all establishments in the country.

The Ministry of Statistics and Programme Implementation (MoSPI) has partnered with Common Service Centres, CSC e-Governance Services India Limited, a Special Purpose Vehicle under the Ministry of Electronics and Information Technology as the implementing agency for 7th Economic Census. An IT based digital platform for data capture, validation, report generation and dissemination will be used in this Economic Census.