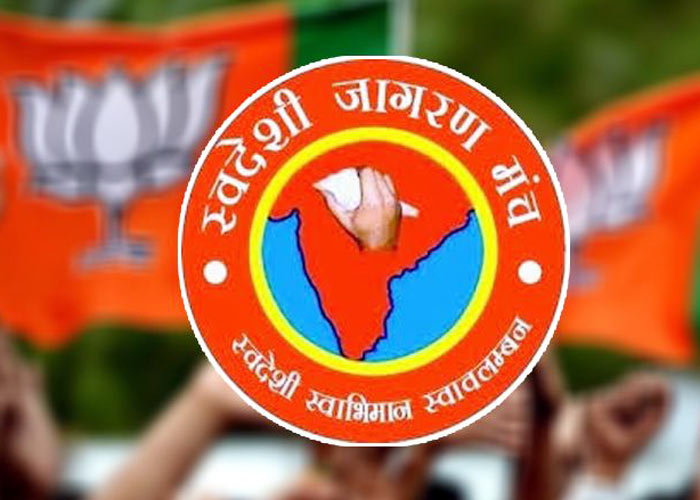 Barely 72 hours before US President Donald Trump lands in India, the RSS‘s economic arm has warned Modi government against promising of any trade deal that allows the US to eat into India’s over Rs 10,000 billion dairy business.

Before you jump to conclusions that the opposition is to protect the domestic dairy interest alone, think again. The Swadeshi Jagran Manch has brought in a religious angle to it.

Its Co-Convenor Ashwani Mahajan said: “Milk is a vegetarian diet in India. Demand of US administration is that India should remove the condition that only the milk of vegetarian cows be imported from US. Since, in the US, cows are fed with blood and meat, and import of milk from such cows is prohibited in India.”

“US needs to understand that this demand of US is not only unjust, it can’t be accepted also due to religious reasons.”

But the RSS’s economic arm is equally if not more concerned about the possible economic blow the sector may face, once US giants have access to India’s dairy market.

Assuring that India must not worry about US intimidation, Mahajan told that India can’t afford to allow access to the US to its vast domestic dairy market that may endanger their survival.

“It’s important to note that while the US is pressing India to protect the interests of its companies, India’s first priority is to protect its public health, employment in small businesses and industries”, Mahajan wrote in a blog.

So what about give and take? He insists India does not need to focus on such a negotiation.

Elaborating his stand, Mahajan told: “Contrary to the narrative that was sought to have manufactured, after the withdrawal of General System of Preferences (GSP) by the US, India’s exports items actually increased by 32 per cent in June 2019, instead of showing any decline.”

According to the latest report by IMARC Group, the dairy market in India reached a value of Rs 10,527 billion in 2019. More than 10 million dairy farmers belong to 96,000 local dairy cooperatives, and sell their product to one of 170 milk producers’ cooperative unions who in turn are supported by 15 state cooperatives.

In a market where US dairy giants can flood the market with milk and dairy products like cheese, butter, and ice cream with very competitive prices, there is a real threat of survival for most of these dairy farmers, most of whom run small operations, fears Mahajan.

In 2019, India’s dairy sector grew at a rate of 6.4 per cent annually against the global growth rate 1.7 per cent. But the RSS offshoot fears that the US entry can alter the growth rate.

While he hopes the present tour of President Trump can’t seal a deal that will give access to US to India’s dairy or poultry market, he calls US’s pressure tactics an “arm twisting exercise”.

With less than three days to go before Air Force One lands in Ahmedabad, the RSS’s economic wing has made its stand clear — Don’t give US access to India’s dairy market.  (Agency)