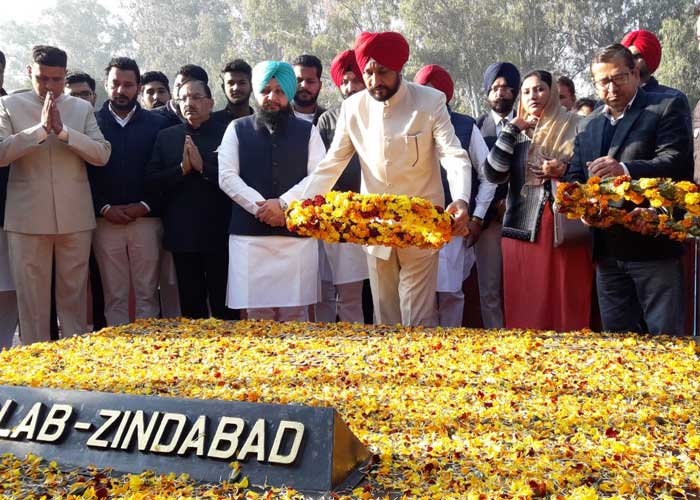 Addressing the massive gathering at the district level republic day event at Shaheed Bhagat Singh Stadium, the minister said that the contribution of Punjabis in the independence movement can never be forgotten as Punjabis account for about 80 percent contribution into this movement despite having 1.6 percent geographical area of the country.

To give a fillip to the skill development mission in the district a new ITI has been planned in the village Tibbi of Mamdot tehsil besides reviving the old ITIs, said the minister. Mr. Channi said that the state government will leave no stone unturned to ensure the holistic development of this border district.

After unfurling the national flag, he said in his address that we were fortunate that we got the opportunity to celebrate the 550th birth anniversary of Shri Guru Nanak Dev Ji as a part of which gala events were organized at Sultanpur Lodhi and Dera Baba Nanak, where about 70 Lac devotees paid obeisance during the birth anniversary festivals.

The minister stated that the state government has prepared a plan to develop the Sultanpur Lodhi as a heritage city with the cost of Rs. 271 Crore besides developing 70 villages of Punjab related to Shri Guru Nanak Dev Ji, with a total cost of whopping Rs. 300 Crore.

Apart from that Bebe Nanki University College has been established in the Sultanpur Lodhi and the inter-religion center has been set up at Guru Nanak Dev University, Amritsar, added Mr. Channi.

The minister further added that, taking steps to achieve the goals a whopping amount of Rs. 4736 Crore as debt has been waived of benefitting around 5.83 Lac small and marginal farmers adding he that Chief Minister Captain Amarinder Singh led state government has ensured the crop payment to farmers with 48 hours of the sale.

Whereas a sum of Rs. 675 Crore is being spent on the holistic development and up-gradation of grain markets in Punjab, said the minister. He further added that Punjab has witnessed the massive investment of Rs. 55,000 Crore due to its industry-friendly policies.

Addressing the mammoth gathering on the auspicious occasion, the Minister said that state government has brought a debt-waiver scheme and fulfilled its promise besides cracking down on drug menace by setting up Special Task Force (STF) in the state to wipe out this menace from Punjab. Due to crack down on the supply-line of drugs the recovery of Heroin has increased from 191 Kilogram in 2017 to 432 Kilogram in 2019.

He said that to bring drug-affected people to the mainstream, the state government has set up 35 drug de-addiction centers in the state besides 192 government fun outpatient opioid assisted treatment (OOATs) centers and as a result of these efforts about 3.66 Lac patients have got themselves registered for the treatment and a sum of Rs. 104 Crore has been spent on this task.

Fulfilling its promise to employ the youth of the state, the government has started the construction work of Shri Guru Gobind Singh Skill institute (a state of the art institute), which will come up at Shri Chamkaur Sahib at 42 Acre of Lands.

Throwing light on efforts being made to preserve the environment to mark the 550th birth anniversary of Shri Guru Nanak Dev Ji, a total of 76 Lac plants have been planted in the entire state, which led toward the increase of forest area of the state by 1,363 Hectares.

Delivering on its promise of improving education infrastructure in the state, the state government making a bright future of the students has converted 5730 government schools into smart schools, said the minister.

He said that the government is committed to opening 11 new government colleges in the state with the cost of Rs. 50 Crore and to improve the quality of education the bio-metric attendance of students and teachers is being mandatory in educational institutes.

Earlier the minister visited Hussainiwala, the martyrdom place of Shaheed Bhagat Singh, Rajguru and Sukhdev and laid a wreath to pay his obeisance to the martyrs. Meanwhile, Chief Guest took a salute during an impressive march past accompanied by deputy commissioner Mr. Chander Gaind and SSP Mr. Vivek S. Soni. Mr. Channi also felicitated the various officers or employees and persons from different walks of life for their remarkable contribution towards society.

Deputy Commissioner Chander Gaind announced local holiday on January 29th, on the context of festival Basant Panchmi. He added that the holiday which usually announced for the next day of Republic Day shall now come into effect on January 29th, 2020.

The tableaus successfully showcased the schemes like Tandurast Punjab, Ghar-Ghar Rojgar Mission, Debt Waiver Schemes and many more. During the event, the best tableau received a special note from the chief guest.

The tableau of skill development mission won the first price, followed by the Ghar Ghar Rojgan Mission on second place and Smagar Siksha Abhiyan on third position. Meanwhile, three youths of the district mesmerized audience with their amazing motorbike stunts.