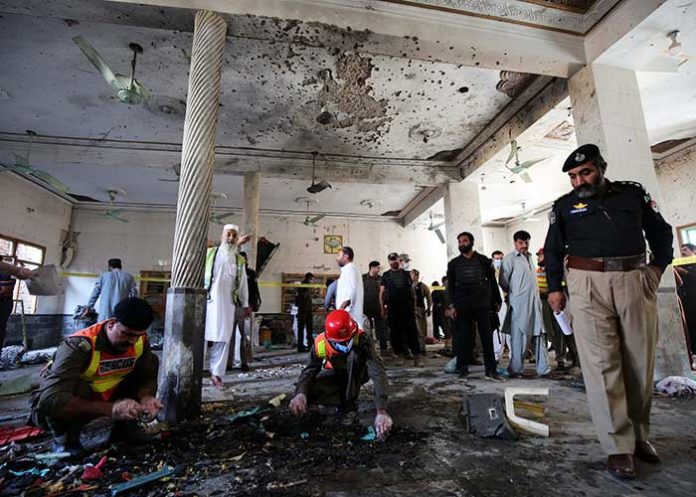 Peshawar, Oct 27, 2020-
At least eight people were killed and 125 others injured after an improvised explosive device (IED) went off inside a madrasa in Peshawar, according to authorities.

The incident took place inside the Jamia Zuberia madrasa located in the city’s Dir Colony, and according to police sources, around 40-50 children were present when the bomb went off, The Express Tribune reported.

SP City Peshawar Waqar Azeem told The Express Tribune that an unidentified man entered the madrasa at around 8 a.m. and left a school bag in the premises.

He said the bag was believed to have had the IED device that went off when the children started coming in for their morning classes.

The bodies were shifted to Peshawar’s Lady Reading Hospital.

Hospital Director Tariq Burki said of the eight victims, four were children, and at least 50 of the injured were also kids.

No terror group has claimed responsibility for the attack so far.

President Arif Alvi and Prime Minister Imran Khan condemed the blast, with the latter saying “we will ensure the terrorists responsible for this cowardly barbaric attack are brought to justice asap”, The Express Tribune reported.

Former Prime Minister and PML-N supremo Nawaz Sharif said those who targeted the madrasa “could not be Muslims”, adding that Tuesday’s incident reminded him of the 2014 Peshawar Army Public School massacre in which 132 students and 17 staff were killed. (Agency)